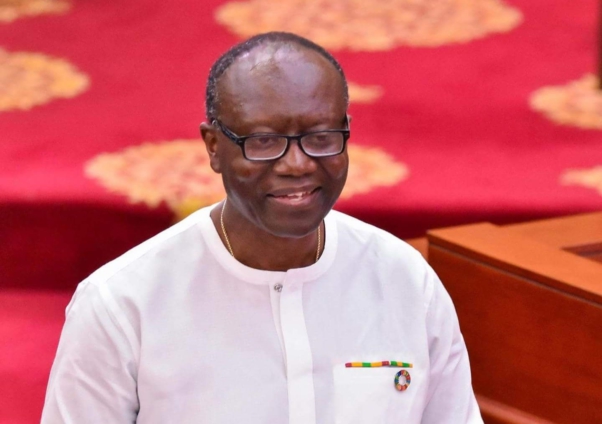 Ken Ofori-Atta is the Finance Minister

Finance Minister Ken Ofori-Atta has said the Agyapa Royalties deal, which he described as a clean one, is part of the ‘Ghana Beyond Aid’ agenda.

“Five hundred times more gold is traded every day than is mined; much of this happens in countries that have virtually no gold to themselves. President Akufo-Addo says to achieve Ghana beyond aid we must add considerable value to what we produce and trade,” he said.

“We all fail to see this value because when assessing the effectiveness of our policies and legislations we limit the extent of expectations to our national boarder.

“We take no interest in what happens to our resources when they leave our shores, whether how they are traded in foreign markets or how companies leverage them to create cheap financing or the different ways in which they are utilizing to generate profits,” he explained further.

Ken Ofori Atta bemoaned the nation’s lack of benefit from natural resources such as gold, bauxite and oil which it has failed to add value to these resources.

According to him, that has placed the nation at the bottom of lists of beneficiaries of rich countries.

“For centuries, the reality has been our governments and our people get far less than what we deserved.

“We are placed at the bottom of the list of the beneficiaries of our own riches, whether it is gold, cocoa, timber, bauxite or diamond. The story has been everywhere. This is predominately to do with the fact that our value extractions and the point that resources leave our shores. Unfortunately, analysis taken over the period has shown that the largest increase in value occurs at exactly this point when it leaves our shores”, he stressed.

Continuing, the Finance Minister said the government is committed to breaking the economy free from the old practices of exporting natural resources without added value.

“If the foreign investor can use recoverable reserves in our country– he has in our permission granted us to him– to raise monies which he can choose to spend here or other businesses elsewhere, why can’t we do the same to maximize the benefit we get and use that additional income to accelerate our development and by so doing expand our economy”, Mr. Ofori-Atta questioned.

According to him, the country has failed to leverage the most important element of risk value that is future cash flows, adding “companies utilize their assets to our concessions and future resources as a means to invest in new exploration, new developments, technology, diversification, ultimately to reduce their cost of borrowing.”

He added “we can leverage these parties who give companies funding, but first we must first acknowledge that those with access to capital are not limited to our public institutions.

“Gold companies, oil companies or cocoa companies, in most cases the vast majority of those entities are willing to pay a premium for access to our resources exist beyond our boarders, and therefore we need to create structures that allow us to access their funding.

“If we don’t do that, we allow ourselves to remain captives of the international companies that our resources and simply market them to the same groups that we chose to ignore”.

He took a swipe at critics who argue that the nation was mortgaging its natural resources.

“There are those who say we should be careful not to mortgage or sell today the golden eggs for future generations. First of all, this is not the case, but I have two questions for those who raised these concerns. If it is ok for the foreign investor who holds the concessions to sell what is on the ground upfront,  then why not us?

Agyapa is 100% owned by the Minerals Income Investment Fund, which is a state organization.

The deal was approved on Friday 14th August 2014, with the minority boycotting the endorsement.

DISCLAIMER: The Views, Comments, Opinions, Contributions and Statements made by Readers and Contributors on this platform do not necessarily represent the views or policy of Multimedia Group Limited.
Tags:
Agyapa deal
Ghana Beyond Aid
Trade