Two former air force pilots have been sentenced to six years in prison by a French court after 26 suitcases stashed with cocaine were found on board their plane in the Dominican Republic.

The Frenchmen, Pascal Fauret and Bruno Odos, fled the country following the raid and were rearrested in France.

A further five people have also been handed sentences for their involvement.

Ringleader Ali Bouchareb was given 18 years in prison. His accomplice Frank Colin was handed a 12-year sentence.

Two others were acquitted after the seven-week trial.

The case, dubbed "Air Cocaine" was reported in March 2013 when police in the Dominican beach resort of Punta Cana opened suitcases on board a Falcon jet to find them stuffed with 680kg of cocaine. 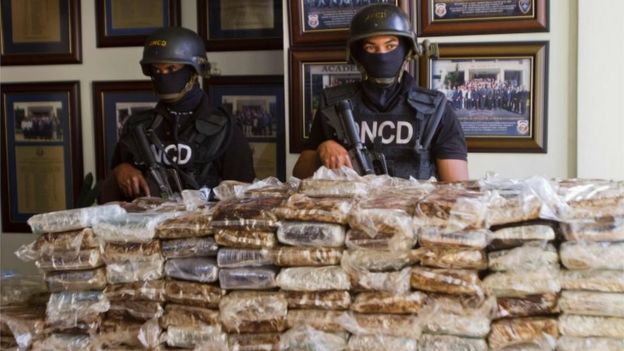 The plane was grounded as it was about to leave for Saint-Tropez in the south of France, and the two pilots and two passengers were arrested.

But while on bail, Fauret and Odos fled the country. They were rearrested in November 2015 upon their return to the French mainland.

All four denied knowing that the suitcases were filled with narcotics. However a judge in the Dominican Republic ruled that they were responsible for what was on board their plane and sentenced them in absentia to 20 years in jail.

At the time of the arrest in France, the pilots' lawyer said they had returned to France "not to flee justice but to seek justice".

Five French magistrates deliberated the case for 11 hours before handing down their verdict on Friday.

Relatives of Fauret could be heard shouting "we will not leave you there Pascal", Le Monde reported.