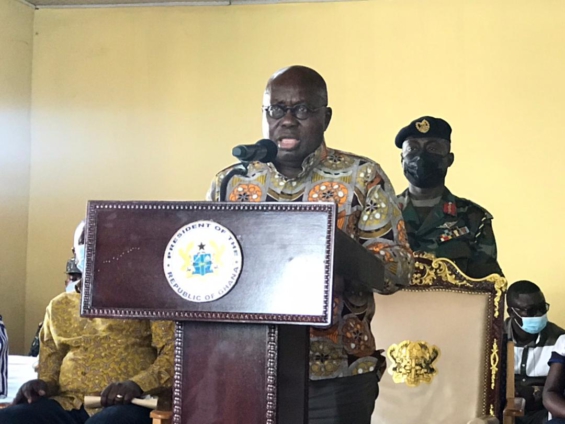 President Nana Akufo-Addo has reiterated government’s commitment towards diversifying the Agric sector through the establishment of the Tree Crops Development Authority.

The Authority, he said, is set to provide the needed support to some seven tree crops, including Cashew.

Addressing the chiefs and people of Nkoranza as part of his two-day tour of the Bono East Region, the President assured cashew farmers in the area of government’s resolve to boost the sector by making it “one of Ghana’s number one export crops like cocoa”.

“Cashew development is of much significance to me because there are lots of benefits associated with it, and the Tree Crops Development Authority is now developing various strategies to help shape the Cashew trade,” he said.

“Their work would include production, marketing and grading, just like it is done in the cocoa sector. They’ll replicate same in the cashew industry, and I am closely monitoring their progress,” he added.

The President added, “I am hopeful that by the 2022 Cashew season, we’ll be through with this and cashew farmers here would see some impact in the work of the Authority through its pricing.”

On his part, the Omanhene of the Nkoranza Traditional Council, Nana Kwame Baffoe IV, lauded the President for his contributions towards the development of Agriculture in the area.

He said the new warehouses at Yefri in the Nkoranza North District and Donkoro Nkwanta in the South District would help eliminate post-harvest losses when commissioned.

He, however, appealed to the Cashew Board to intervene in the pricing of cashew across the country.

He called for the establishment of a cashew juice factory under the 1D1F policy to help utilize the cashew apple, which would help create jobs in the area.

DISCLAIMER: The Views, Comments, Opinions, Contributions and Statements made by Readers and Contributors on this platform do not necessarily represent the views or policy of Multimedia Group Limited.
Tags:
Cashew farming
President Akufo-Addo