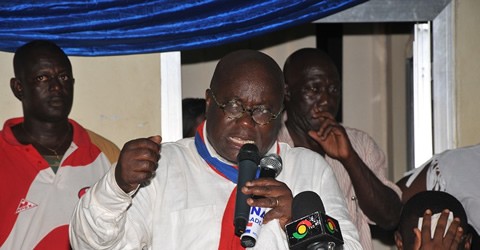 Nana Akufo-Addo has expressed confidence that the senior national soccer team, the Black Stars will make a better showing  at 2014 FIFA World Cup in Brazil.

Flagbearer of the New Patriotic Party (NPP) in the 2012 elections noted that "with unity, determination and hard work" from the players and their technical handlers, the team will make Ghana proud.

Ghana is making a third straight appearance at the global showpiece following a successful showing in the 2006 and 2010 editions in Germany and South Africa, respectively.

Confidence in the team has been buoyed following a resounding 4-0 routing of South Korea Monday night, to wrap up preperations ahead of the tournament which begins on June 12.

In his message to wish the team well, Nana Addo said: "I have no doubt whatsoever that, again, in Brazil, with a group consisting of Germany, Portugal and the USA, the Black Stars will shine even brighter".

The odds are against the  Black Stars who have been grouped with European powerhouses -Germany and Portugal- as well as the USA whom Ghana defeated 2-1 in 2006 and 2010.

However, Nana Addo is of the view that the "can-do-spirit of the Ghanaian", which the team exhibited in Germany and South Africa, would be made manifest again in Brazil.

"I believe strongly that with unity, determination and hard work from captain Asamoah Gyan and our players, the Kwasi Appiah-led technical team and management, and the unflinching support of us all, the Black Stars will make us proud. Best of luck! God bless!"

The first two teams in the group after three round of matches, would qualify for the knock-out stage of the competition.