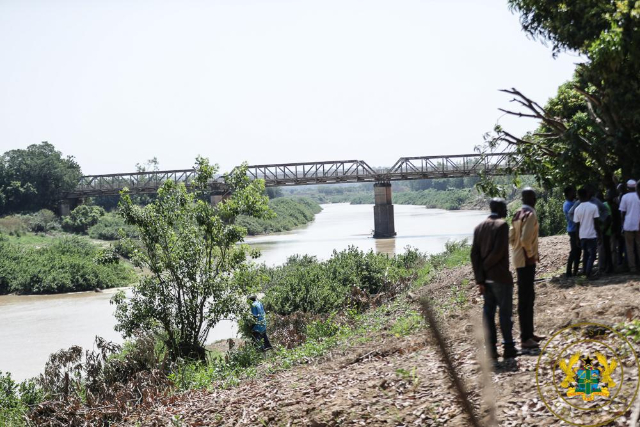 President Nana Addo Dankwa Akufo-Addo has cut the sod for the construction of the Pwalugu Multipurpose Dam and Irrigation Project.

The project, according to President Akufo-Addo, “will be the single, largest investment ever made by any Government in the Northern sector of the country”, and is in fulfillment of a pledge he made to the Ghanaian people on February 21, when he delivered the Message on the State of the Nation.

“Today, we begin the process of realising this pledge. Today, we start the process of helping to bring respite to the people of the Northern Regions of our country, and to lay the foundation for the sustained growth and development of the area,” he added.

President Akufo-Addo noted that the 60 megawatt hydropower plant and the 50 megawatt solar power plant will be the very first hydro-solar hybrid system in the country, with the two technologies complementing each other to provide reliable and stable electricity supply to the national grid.

Additionally, the irrigation component of this project, the largest ever built in the country, with 15,000 out-grower beneficiaries, the President added, will complement the gains made by programmes such as “One Village, One Dam” and “Planting for Food and Jobs”.

With the transformation of North hinging on creating infrastructure, and supporting agriculture and agro-based industries, the President bemoaned the fact that in the dry season, agricultural work comes to a halt in the Northern Regions, as farmers continue to be dependent on rain-fed agriculture.

“Irrigation, therefore, remains a key strategy to achieve food security, the eradication of poverty and generation of rural employment in the Northern sector, in particular, and, generally, across the country,” he said.

President Akufo-Addo continued, “With millions of dollars spent on rice imports annually, in the midst of an abundance of fertile lands, this project has the potential to increase annual rice production in the country by up to one hundred and seventeen thousand (117,000) metric tons, reducing rice imports by as much as 16%.”

Again, he revealed that the Pwalugu reservoir can accommodate up to one hundred and twenty thousand (120,000) cages of twenty-five (25) square metres each of fish, with an average yield of two (2) tons per cage, making possible the continuous development of the country’s aquaculture and fisheries sector.

This project, he added, is also very crucial to the realisation of the “One District, One Factory” initiative, as it will serve as a catalyst to developing agro-industry, including reviving the Pwalugu Tomato factory.

“Other hydro-electric projects, such as Akosombo and Bui, were intended also to have irrigation schemes, but they have, unfortunately, not materialised. The story of the Pwalugu Multipurpose Dam and Irrigation Project will be different,” he assured.

“In all, two thousand, two hundred (2,200) Ghanaians, skilled and unskilled, will benefit fully from the project, with the contractor mandated also to source services such as catering, security, water, cement, steel, office logistics, and other supplies locally,” the President stated.

DISCLAIMER: The Views, Comments, Opinions, Contributions and Statements made by Readers and Contributors on this platform do not necessarily represent the views or policy of Multimedia Group Limited.
Tags:
Akufo-Addo
Irrigation project
Pwalugu Dam