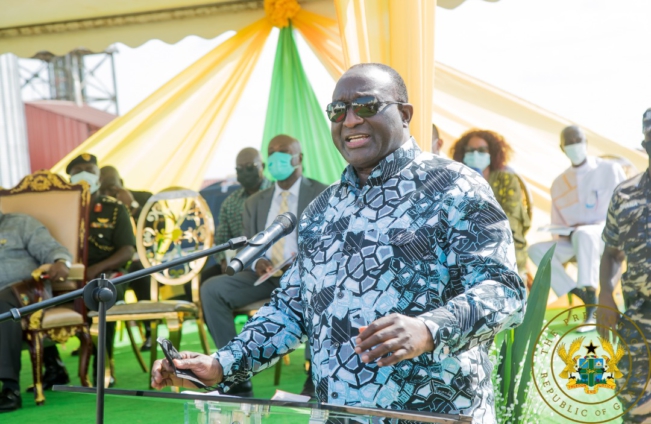 The Trade and Industry Minister, Alan Kwadwo Kyerematen has taken a commanding lead ahead of his close contender the Vice President, Dr. Mahamudu Bawumia as the New Patriotic Party (NPP) gears up to elect its Presidential Candidate for the 2024 general elections.

According to a research conducted by Global Info Analytics, a renowned organization with experience in public opinion polling and data analytics, Alan Kyerematen is winning the NPP Presidential election by 44% against 32% by Dr. Bawumia.

Other aspirants including MP for Essikado Ketan, Joe Ghartey, Minister for Food and Agriculture and a close confidant of the President, Dr. Afriyie Akoto, and Mr. Boakye Agyarko, the former Energy Minister received just about 7% while 17% is undecided.

The opinion polls further revealed that the Trade Minister, Alan Kyerematen who contested the current President, Nana Addo Dankwa Akufo-Addo in 2007 for the same position is more popular among floating voters than Dr. Mahamudu Bawumia.

According to Global Info Analytics research, Mr. Kyerematen received about 50% of the floating voters with his closet contender receiving only 25%.

The research outcome was revealed by Dr. Musa K. Dankwa, the Executive Director and Head of Polling of Global Info Analytics during Citi TV’s ‘The Big Issues’ on Saturday.

Another panelist on the programme, Sammi Wiafe, who is Citi TV’s Presidential correspondent, added that he has also seen other research outcomes putting the Trade and Industry Minister ahead of the Vice President and other contenders.

Although the Presidential primaries are some months away, potential aspirants including other stalwarts of the party have been lacing their boots for the contest ahead.

The NPP elects a Presidential candidate every four years according to the Party’s constitution with an electoral college of over two hundred thousand, made up of Party executives from all the 275 Constituencies.

Alan Kyerematen made an attempt at the leadership of the New Patriotic Party in 2007, capturing 32.3% of votes cast.

He was first runner-up to Nana Akufo-Addo who gained 47.96% of votes cast.

Mr Kyerematen made other attempts at the party’s leadership in 2010 and 2014 but placed second to Akufo-Addo, who won the primaries.

Mr Kyerematen has been the longest serving Trade Minister in Ghana having served in the same capacity under President Kufour.