Alicia Keys: ‘I felt I was from another planet’ 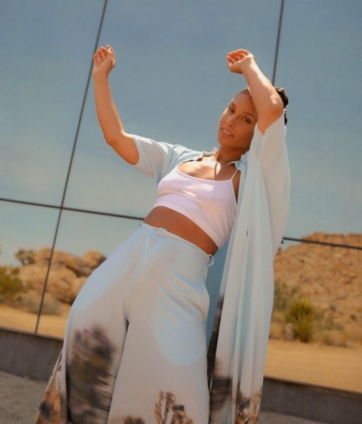 On 27 February, 2002, Alicia Keys was miserable with the flu. She was also due to attend her first-ever Grammys.

That night, she was up for six awards, including song of the year for Fallin’, and was due to perform a medley of hits alongside Flamenco dancer Joaquin Cortes.

“I willed myself out of bed,” she recalls in her autobiography, More Myself. “I wasn’t about to miss my first Grammys, even if my face crashed right down onto the piano keys.”

A shot of vitamin B12 carried her through the ceremony, where Keys scooped five of those six awards, tying Lauryn Hill’s record for the most trophies for a female solo artist in a year.

The mixture of exhilaration, illness and drowsiness made it feel like she’d “ascended into outer space”.

“What new artist wins five awards after just one album?” The whole night “felt unbelievable to me,” she adds, “even otherworldly”.

Fast forward to 2020 and Keys was back at the Grammys – this time as host – as Billie Eilish replicated her five-prize success.

The teenager, who was born in the year Keys released her debut, seemed uncomfortable with all the acclaim. As the nominees for album of the year were read out, the camera caught her saying, “please don’t be me”. On stage, she confessed to feeling undeserving.

Watching from the sideline, Keys knew exactly what she was going through.

“Oh my God, absolutely,” she says. “There you are, with all these accolades and all this celebration – and you don’t know exactly what to do with it, or even why was it you.

“It feels almost like it’s overkill. You think, ‘Spread it around, don’t just give [the awards] to me,’ you know? I definitely recognise that, I understood that.”

The following morning, Keys called Eilish to offer her support.

“I wanted to congratulate her because I was so happy for her,” she says, “because not only does she have a beautiful voice but she’s not trying to fit in to the crowd – and that’s such an important thing to see.

“So when I called her I said, ‘Don’t for one second think that you didn’t deserve this. You deserve all of this, and don’t forget it.’

It’s a surprise to learn that Keys ever felt inadequate or unworthy. Her music pulses with strength and messages of emancipation. Even U2’s Bono says the star gives off a “don’t eff with me” energy.

But, as she explains in her book, More Myself, songs like Superwoman and Girl On Fire weren’t written by someone who had the world figured out. Instead, “the lyrics were what I needed to hear”.

Keys was miserable, second-guessing her instincts and worried about sustaining her success. Worse still, she let others prey on those fears to make her work harder.

By 2006, “I no longer belonged to myself,” she writes in the memoir. “I’d become captive to every request, every demand, every surge of fear that came with even the thought of saying no.”

After breaking down in her dressing room one night in New York, she booked a solo trip to Egypt and escaped. On the first day, she lost her voice to laryngitis.

Forced to slow down and pay attention to her feelings, she resolved to wrestle back control of her life, “setting boundaries and making changes for the better”.

But change didn’t come overnight. Learning to stand up for herself and resisting the urge to please others took years of practice. Keys was also forced to confront aspects of her personality she’d previously suppressed.

“I’m not as comfortable [with] the parts that are very vulnerable or even angry,” she says.

“Anger is not an emotion that I’m very in touch with, and I realised that that’s because my mother has always had a really big, strong personality. Because of that I’ve always kind of had to manage her emotions and be the peacekeeper. And so I got used to that.”

Born Alicia Augello Cook in 1981, Keys was raised in Hell’s Kitchen – one of New York’s toughest neighbourhoods. Her father left when she was two, forcing the family to scrape by on her mother’s meagre salary as a paralegal.

Despite their limited finances, she insisted that her daughter take piano lessons, practising on a battered upright a friend had donated.

Keys turned out to be a prodigious talent, both musically and academically. She skipped two years of school, graduated valedictorian from New York’s Professional Performing Arts School and signed her first recording contract when she was 15. But those achievements (and the fact she was taller than her older classmates) exaggerated a feeling of otherness.

“I have felt like an outsider,” she says. “I think I learned along the way how to fit into multiple circumstances in different places, different spaces, different people. But I always felt like I was from another planet or another time, and I didn’t really belong here.”

“Like I was somehow dropped in this era and I was like, ‘Wait, how did I get here?'”

Keys is certainly an old soul. One of the reasons the music community embraced her debut album so readily was her ability to splice the sophisticated soul of the 70s to the street sounds of hip-hop.

But that sensibility failed to impress her first record label, Columbia, who wanted to market her as a clean-cut teen idol. The piano prodigy was told to make her music “more radio-friendly” and “less piano-driven”. With depressing inevitability, she was also told to lose weight and show more cleavage.

Incensed, she fought her way out of the contract, even managing to retain the rights to her master tapes, which she brought to Clive Davis’s J Records.

Songs In A Minor, which contained many of the songs Columbia had dismissed as sounding “like a demo”, was eventually released in 2001 and went on to sell 12 million copies.

Keys characterises the fight for control as her “first act of artistic defiance” – and it demonstrated a self-confidence that was lacking in other areas of her life. But Keys says the one thing she’s never been willing to compromise on is her music.

Around the same time that Keys was writing her autobiography, she started work on her seventh album. Inevitably, as she explored her identity on paper, the music started to reflect the opening up of her personality.

So alongside the chilled-out ballads and motivational lyrics, you get to see her “crazy, freaked-out, seeing red, yelling and screaming” side, on a track like Truth Without Love (sung, she says, with a “lip curl”); or her confused, self-sabotaging side, on the country-tinged Gramercy Park.

That’s why the record is simply called Alicia – “because I know for a fact that this is the first time that I’m fully meeting myself and getting to know all of me.”

The album was originally due out in March – but Covid put a stop to that, as well as a mammoth world tour that was due to take up the rest of her year.

The pause gave Keys time to tinker with the album – but it also gave some of the songs an unexpected resonance.

Good Job, for instance, was written last year as a tribute to her mum and the other “honest and selfless” people whose everyday sacrifices went unnoticed.

“Every time I played it, people would have tears in their eyes – even before all of this,” she recalls. In the midst of the pandemic, however, the song became an anthem for the doctors, carers, teachers and delivery drivers on the frontline.

“I would have never imagined in a million years that it would be so relevant,” she says, “but the spirit of the song is the same: Those who need to hear that they’re doing a good job are often the ones who don’t [get] celebrated.”

On the other hand, the heart-breaking Perfect Way To Die was written with one eye on the future.

Telling the story of a grieving mother whose child was murdered, it alludes to the deaths of Michael Brown, who was killed by police in Missouri in 2014, and Sandra Bland, who died in a jail cell in 2015 after Texas police stopped her for a minor traffic violation.

After the deaths of George Floyd and Breonna Taylor, the song assumed a new urgency. Keys performed it at June’s BET Awards in a deserted New York City, surrounded by murals of Floyd, Taylor and Bland. At the end of the song, she knelt on the street, which had been stencilled with names of dozens of black men and women whose lives have been lost to racism and police brutality.

“I always knew it would be relevant, unfortunately, the blatant disrespect of black lives,” says Keys. “So in a sad way I did actually know that whenever [the song] came out, it would be right on time.

“I didn’t know that I would feel so moved to bring it out during this time, as this whole planet is recognising this tremendous injustice, no matter where we’re from.

“I don’t think there’s been that consciousness before. Many people have just said, ‘too bad that’s going on but that’s not me – without really recognising how everybody does participate in the outcome of what’s acceptable and not acceptable.

“And that’s actually part of what I believe is going to transform it and make it completely unacceptable. I look forward to that happening.”

Already a powerful song, Perfect Way To Die becomes even more intense on the album, where it arrives immediately after one of Keys’ most care-free moments – a duet with neo-soul singer Jill Scott. But as the two songs segue, rain starts to fall and the mood darkens.

“I really thought about that a lot,” says Keys. “I wanted to make sure that it was a big transition in a way that shocks you.”

It’s an artistic move she might have rejected in the past – but with a new-found confidence, Keys is ready to rock the boat.

“In a lot of ways I feel like I’m just getting started,” she says. “You haven’t even seen me yet!”

DISCLAIMER: The Views, Comments, Opinions, Contributions and Statements made by Readers and Contributors on this platform do not necessarily represent the views or policy of Multimedia Group Limited.
Tags:
Alicia Keys
Entertainment
music industry