Although you are not expected to convict corrupt appointees, don't also be clearing them - Kofi Bentil to Akufo-Addo - MyJoyOnline.com

Although you are not expected to convict corrupt appointees, don’t also be clearing them – Kofi Bentil to Akufo-Addo 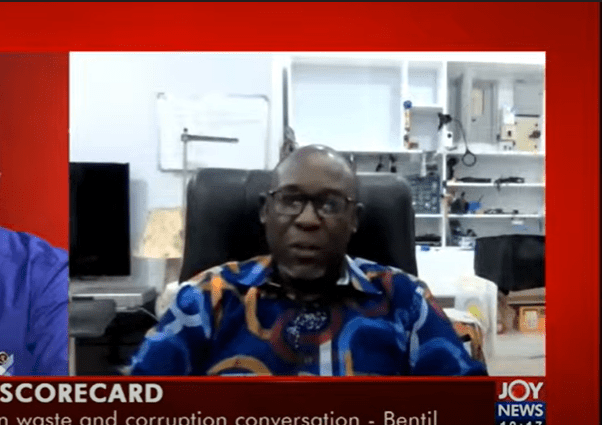 Speaking on Newsfile on Saturday, stated that he was disappointed in the President’s corruption fight.

“I think as a country, we’ve failed abysmally in the last few years,” he said.

He said former President John Agyekum Kufuor’s ‘Zero Tolerance for Corruption’ initiative was laughed at, but when Akufo-Addo said he was going to fight corruption, Ghanaians believed him and expectations were quite high.

“…And it is because of the background of someone like the President whom we believed would fight corruption. For many reasons, we cannot cite him, at least in his previous political life, as someone who is corrupt. He said he is not corrupt…we believed him.

“He said he was going to use the Anas Principle; we believed him. And so many things which gave us hope that this was going to be the President that would fight corruption.”

President Akufo-Addo has said that his administration has undertaken “arguably” the boldest steps in dealing with corruption since Ghana attained independence nearly 65 years ago.

According to him, all allegations of corruption levelled against his appointees so far have been probed.

“My job is to act on allegations of corruption by referring the issue to the proper investigative agencies for the relevant inquiry and necessary actions, including, if required, the suspension of the affected official, pending the conclusion of the investigation. That is exactly what has been done since I assumed the mantle of national leadership,” he said.

He, however, noted that he, as President was not in the best position to convict any person accused of wrongdoing or engaging in acts of corruption. “That is the job of the courts,” he said.

The private legal practitioner emphasised that the Presidents’ performance has been abysmal, which puts a dent in his legacy when it comes to fighting corruption.

“We all know that signalling when it comes to corruption is extremely important. And the signalling from this presidency and this President has been very bad.”

Mr Bentil advised the President not to assume the role of clearing such persons and make pronouncements of people under investigation.

“Even if he’s not the one to convict, leadership requires you to make the right selections. And you’d be judged based on the people you surround yourself with.

“This is the President who appointed the person to the procurement agency who was implicated in very serious corruption. And it is not the first time. We know about the task force.