AMA removes unauthorised signages along the High Street in Accra 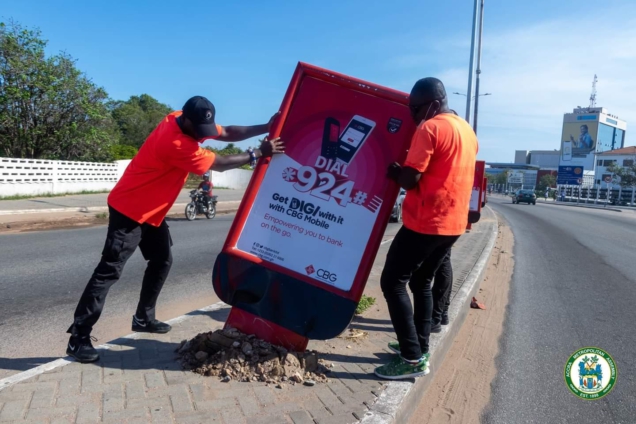 The Accra Metropolitan Assembly (AMA) has removed unauthorised signages mounted in the median along the John Evans Atta Mills High Street in Accra.

The exercise forms part of measures to rid the city of wrongly sited signages and other out-of-home advertisements, especially those mounted without the requisite permit and obstructing traffic, which is becoming a road safety menace.

Mr Mohammed Adjei Sowah, the Accra Metropolitan Chief Executive, who sanctioned the exercise, speaking to the Ghana News Agency, said no institution or religious body had been given a permit to mount signages in medians within the AMA’s jurisdiction.

He said under the AMA Billboard or Signage and Advertising Bye-law 2017, a person shall not erect, site, or hang a billboard or sign-board or paint a building or any open space for purposes of advertising within the area of authority of the Assembly unless the person first obtains a license from the Assembly for that purpose.

Mr Sowah asked political parties, institutions, and advertising agencies to remove all signages, posters, and banners within the AMA jurisdiction and contact the Assembly to regularise their businesses.

He cautioned the public to use the necessary channels when they want to embark on any outdoor advertisement, adding that the Assembly had developed a single policy document that provides guidelines for the issuance and effective payment of “Out of Home (outdoor) Advertising” permits in the metropolis.