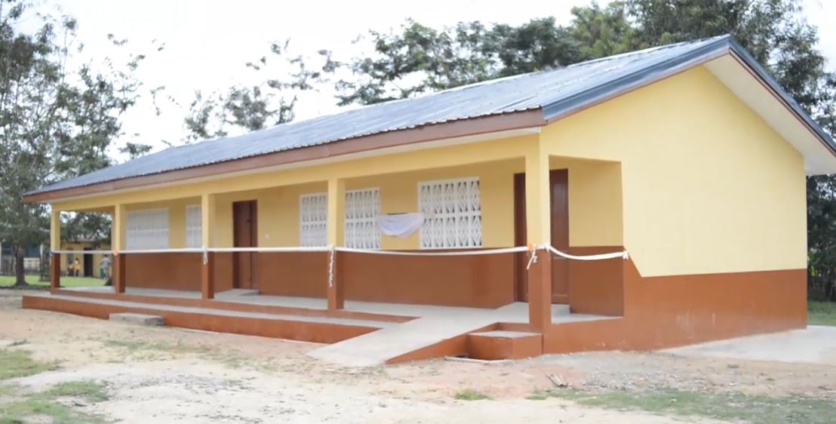 Amaja Tubular Services Limited, a joint venture between Tenaris and Amaja, has commissioned two-unit classrooms for the people of Kwamekrom in the Ahanta West Municipality of the Western Region.

A year ago when the news team visited Kwamekrom M.A. Basic School, part of their school building had been ripped off by the rains, and pupils and teachers had to enjoy harsh conditions.

Teachers and pupils of Kwamekrom Basic Schools in the Ahanta West Municipality for more than a decade studied under frustrating conditions which did not support improved academic performance.

The dilapidated building was a threat to the safety of the pupils, teachers and some residents.

Teaching and learning were halted any time it rained and was greatly obstructing during the peak of the rainy season.

The plea of the pupils caught the attention of Amaja Tubular Services after JoyNews had visited the school.

Commissioning the project, Managing Director of Amaja Tubular Services, Frederick Ocloo, said the project will replace the life-threatening structure, which was used as a classroom for the past decade.

He said providing an enabling environment for the schools would eventually culminate in improved performance among the school pupils.

“The edifice is a two-unit classroom block and each unit is designed and furnished to accommodate a maximum of 15 pupils. We actually began the construction of this facility in May, 2021 and we had it completed in August, this year.

“Studies show that the physical conditions of school buildings positively affect school completion and interest of the student. Our conviction as an organisation, however, is that Kwamekrom M.A. Basic School is well positioned by this intervention to increase school enrollment and improve teaching and learning under conducive environment,” he said.

The Municipal Chief Executive of the Ahanta West Municipal Assembly, John Agyare, who graced the occasion said the intervention would mitigate a major challenge the school faces.

He, however, called for maintenance to sustain the projects.

“Government alone cannot satisfy our needs. Therefore, when we are fortunate to get companies coming to our aid, then I think it’s a very good example and we need to applaud them.

“To the teachers and the community, Amaja company will come back to see what we are using this thing for. Sometimes, when such a thing is built for a company, what we normally do is that, we say it is a government project and maintenance and other things are left for the government.

“Madam Headmistress and the people of Kwamekrom, let Amaja come back to see this beautiful edifice being there very nice,” he noted.

Headmistress of the school, Hanna Kuntu Amponsah, expressed gratitude to Amaja Tubular Services for helping solve their major challenge as a school.