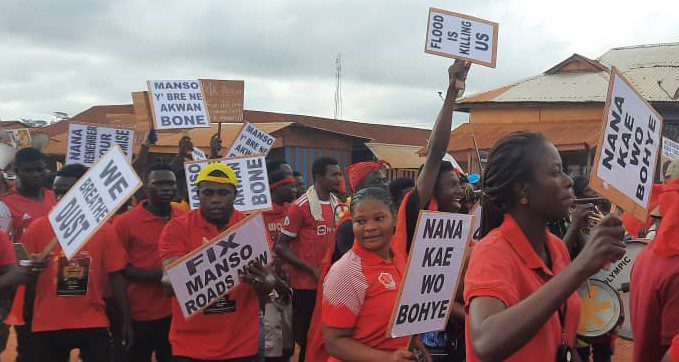 Residents of the Amansie South District in the Ashanti region have embarked on a demonstration to protest dilapidated roads in the area.

They blamed the NPP government for failing to fulfill its 2016 and 2020 campaign promises of fixing the roads in the area, a development they say has affected livelihoods in the district.

Despite their contribution to the country’s development through the provision of natural resources like gold and timber, the district is yet to realise corresponding developments.

The state of the roads in the district, which are currently bumpy and very dusty, pushed hundreds of youth in the area to join the Wednesday protest to press home their demand for better living conditions.

In an interview with JoyNews, the residents said a number of robberies including bullion van robbery have been recorded in the area due to the roads.

“Our roads are full of potholes and dust. We are very frustrated and tired so the government must immediately repair them, otherwise, we may end up losing our lives due to the poor nature of the roads.”

“This is a gold-mining community and we are also transport timbers, all on this road. When it rains, the roads become unmotorable; the government should come to our aid,” they appealed.

The residents clad in red held placards with the inscriptions ‘Enough of the Bad Roads,’ ‘We Swim in the Mud,’ ‘We Breathe Dust’ and ‘Amansie South Deserves Better.’