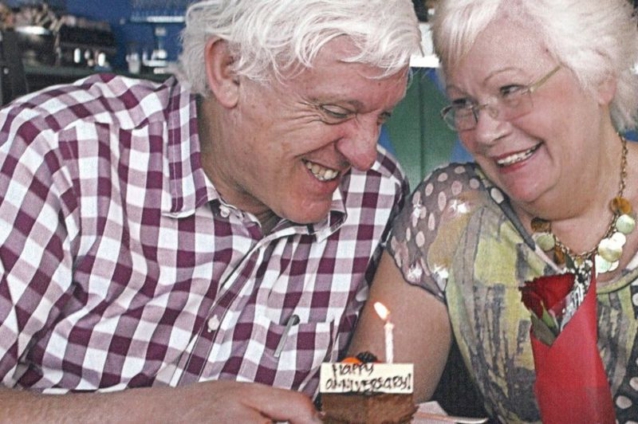 David and Anna Henderson were married for 45 years

A man who received an unsolicited parcel from Amazon addressed to his wife eight months after her death says he is frustrated by the retail giant’s response.

David Henderson, from West Sussex, said Amazon told him a new account had been set up using Anna Henderson’s name and address.

However, the data had not been stolen from her original account.

He says he has received apologies but no action from the firm.

After being contacted by the BBC, Amazon apologised and said it had contacted Mr Henderson to discuss the situation in more depth.

At the time it told him the delivery was probably the result of a “brushing scam”.

This is when sellers set up fake accounts to purchase their own goods, and have them delivered to random addresses. They then leave reviews for themselves using the fake account names, in order to boost their credibility.

Mrs Henderson’s parcel contained a cheap pair of earbud headphones and a packet of light bulbs, both from the same brand, and one that Mr Henderson did not recognise.

“I’d never ordered them and I’m quite sure Anna had not,” he said.

The parcel arrived in June, around eight months after Anna’s death.

“I was a bit blown away,” Mr Henderson said.

“I was upset, seeing Anna’s name and address and receiving this out of the blue.”

He says Amazon told him it could not say who had opened the account or what action it would take.

Amazon confirmed it was unable to tell Mr Henderson who had set up the account because of data privacy regulation.

“I’d like Amazon to tell me what they are doing about it. My big concern is the fact they could be just dusting this under the carpet,” he said.

“At the end of the day, they can wash their hands of it but an Amazon Prime package was delivered to my dead wife.”

A spokeswoman for Amazon said: “Third-party sellers are prohibited from sending unsolicited packages to customers and we take action on those who violate our policies, including withholding payments, suspending or removing selling privileges, or working with law enforcement. We’ve taken action on the account in question.”

She also urged customers to contact the firm if they experience any form of scam, including brushing.

DISCLAIMER: The Views, Comments, Opinions, Contributions and Statements made by Readers and Contributors on this platform do not necessarily represent the views or policy of Multimedia Group Limited.
Tags:
Amazon
scam