Amber Heard wants to appeal jury decision, her attorney says: 'She has some excellent grounds for it' - MyJoyOnline.com

Amber Heard wants to appeal jury decision, her attorney says: ‘She has some excellent grounds for it’ 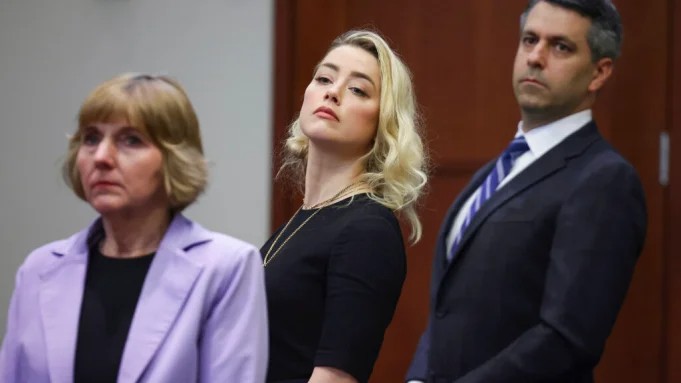 Actor Amber Heard and her attorneys Elaine Bredehoft and Benjamin Rottenborn looks over to the jury just before the verdict was read at the Fairfax County Circuit Courthouse. (Evelyn Hockstein/Pool via AP)

Amber Heard’s attorney, appearing on NBC’s Today, said that her client “absolutely” wants to appeal a Virginia jury’s decision in favour of Johnny Depp, finding that the actress is liable for defamation in her Washington Post op-ed claiming domestic abuse.

“She has some excellent grounds for it,” Elaine Bredehoft told Savannah Guthrie.

In the interview, Bredehoft blamed a number of factors for Heard’s loss, citing evidentiary decisions as well as the influence of social media.

“She was demonized here,” Bredehoft said. “A number of things were allowed in this court that should not have been allowed, and it caused the jury to be confused.”

She cited the different outcome in the UK, where a court ruled against Depp after he sought a judgment against The Sun for referring to him as a “wife-beater.”

She said that Heard’s side was allowed to tell the jury “about the UK judgment. So the damages is completely skewed. There are no damages. It stopped at November 2, 2020, which is when the judgment came down in the UK.”

Asked if Heard can afford to pay nearly $10.4 million, Bredehoft said, “Oh no. Absolutely not.”

The jury also awarded Heard $2 million in damages for one of her claims, made by Depp’s attorneys, that she and her friends staged the scene of one of the couple’s arguments at their downtown Los Angeles penthouse and that the actresses’ allegations were a “hoax.”

Bredehoft said that one of the first things that Heard said after the verdict was, “I am so sorry to all those women out there. This is a setback for all women in and outside the courtroom, and she feels the burden of that.”

She added, “Really what happened here is a tale of two trials.” She said that they were not allowed to tell the jury that the UK court “found that Mr Depp had committed at least 12 acts of domestic violence, including sexual violence, against Amber. So what did Depp’s team learn from this? Demonize Amber and suppress the evidence. We had an enormous amount of evidence that was suppressed in this case that was in the UK case.”

She said that Depp’s team was “able to suppress the medical records, which were very, very significant because they showed a pattern…going all the way back to 2012 of Amber reporting this to her therapist, for example.”

“We had [a] significant amount of texts, including from Mr Depp’s assistants, saying, ‘When I told him he kicked you, he cried. He is so sorry. That didn’t come in.”

Bredehoft also suggested that it was likely that jurors, who were told not to look at media coverage of the trial, were aware of what was happening on social media, where sentiment was overwhelmingly in favour of Depp.

“They went home every night. They have families. The families are on social media. We had a 10-day break in the middle because of a Judicial Conference. There’s no way they couldn’t have been influenced by it, and it was horrible. It really, really was lopsided. …It was like the Roman Colosseum, how they view this whole case.” Bredehoft also noted that she was opposed to allowing cameras in the courtroom, which she said made the trial “a zoo.”

Bredehoft said that she believes that the jury verdict for Depp sends “a horrible message… It’s a significant setback because that is exactly what it means. Unless you pull out your phone and you video your spouse or your significant another beating you, effectively, you won’t be believed.”

The Post, meanwhile, added an editor’s note to the online version of the op ed, noting the jury’s verdict in the case. The publication was not a defendant in the case.