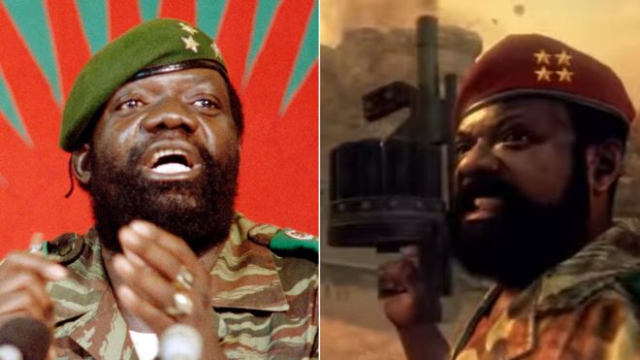 The family of late Angolan rebel leader Jonas Savimbi are suing the makers of Call of Duty over his depiction in the best-selling video game.

Three of Savimbi's children accuse Activision Blizzard of defamation by representing him as a "barbarian".

Angola became a Cold War battleground, with Unita backed by the US and the apartheid government in South Africa, while Angola's ruling party was supported by the Soviet Union and Cuba.

The rebel leader was eventually killed in clashes with state forces in 2002.

Call of Duty: Black Ops 2 shows him rallying his troops with phrases like "death to the MPLA", referring to the party that has governed Angola since independence from Portugal in 1975.

But his family said they are outraged at the depiction.

The three children live in the Paris region and have taken the French branch of Activision to court in Nanterre, near the French capital.

A lawyer for Activision Blizzard, Etienne Kowalski, said the firm disagreed with Savimbi's family, saying it showed the former rebel as a "good guy who comes to help the heroes".

The latest Call of Duty was the world's top selling game last year, and the game has often featured versions of real-life figures.

In 2014, a bid by former Panama dictator Manuel Noriega to claim damages over his depiction in the game was dismissed by a US court.