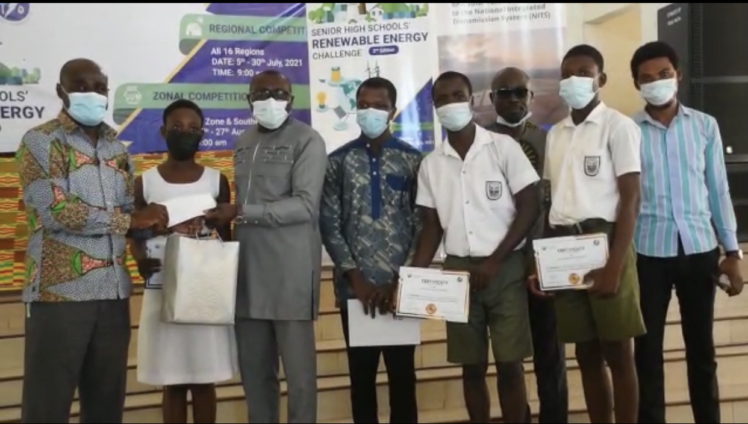 The Anlo Senior High School has been adjudged the winner of the Volta Regional contest of the Bui Power Renewable Energy Challenge.

The school was scored 70.33% on its project idea on the Development of Dye-Sensitized solar cells from zinc oxide and natural dyes, to pave way for exploring ways of conserving power in a building complex.

Anlo SHS will represent the Volta Region in the Zonal Competition scheduled between 16th-27th August 2021.

Their prototype technology stood tall among their peers during the contest where 6 schools presented various invented modules, which exhibited the immense knowledge of students in renewable energy.

Tsito Senior High Technical School presented Solar Powered Electronic Stove. Solar power is conserved and used to power a fan to produce air over water, which then produces a less dense fuel (petrol) to generate gas. The school was scored 66.33%.

Representatives of the St. Paul’s Senior High School in Denu showcased a system they invented to convert solar energy into electricity and ensure efficient use of power in households.

The OLA SHS in Ho showcased a technology developed to enhance LPG vaporization for efficient output of gas using vaporizer during low-temperature periods in Ghana. They were scored 62.23%.

The innovation and technology is to introduce an automated wiper to frequently clean the solar panel. This feature has been omitted since the invasions of solar energy.

This would also improve upon the storage of d.c power by using lithium-ion batteries instead of lead acid batteries.

The technology which the representatives said would be suitable for use in rural communities using solar-powered street lights, water pumps, schools, and community health centres was scored 48.33%.

He said the initiative gave the students platform to practice what they had been thought in the books and believes it would also enhance their presentation and communication skills.

The Director of Finance of Bui Power Authority, Jemima Fayah, who was equally elated with the prowess of the students in the field detailed that her outfit would not relent on its efforts to ensure the youth are equipped with the in-depth knowledge in renewable energy.

“We have seen the potentials in our youth as far as the renewable energy is concerned that is why we are here supporting Energy Commission on this course”, she explained.

“We intend going the long hall on collaborating with the relevant parties to ensure that the youth come on board because we are looking more into the future”, she added.