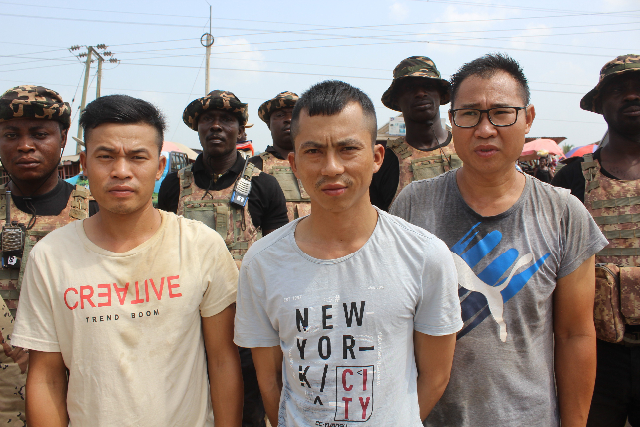 Some illegal miners have attacked members of the Inter-Ministerial task force and small-scale miners after three Chinese foreigners they were working with, had been arrested.

These Chinese nationals were caught mining just at the outskirts of Manso Aponapon of the Amansie South District in the Ashanti Region on Thursday, December 13.

Patrick Don Chebe who is Deputy Commander of the Small-Scale Anti-illegal Mining taskforce explained: “we were attacked with stones which forced the task force personnel to fire warning shots before taking the suspects away.”

He said the Ghanaian collaborators of the Chinese were not willing to see the task force take the foreigners away without a fight.

“Because they were preventing us from arresting these men, we had to call for reinforcement,” he added.

As the government moves to lift the ban on small-scale mining, the Inter-Ministerial taskforce says it is teaming up with the Ghana National Association of small-scale miners.

The aim according to Nana Agyekum of the Inter-ministerial taskforce and National Small-Scale Taskforce Commander Berasi Andoh is to police the mining terrain and ensure compliance with mining regulations.

Nana Agyekum added, “after the ban is lifted small-scale miners with a license cannot work with foreigners.”

The government on Friday, December 14, is announcing a new policy framework for mining activities at the Accra International Conference Center (AICC).