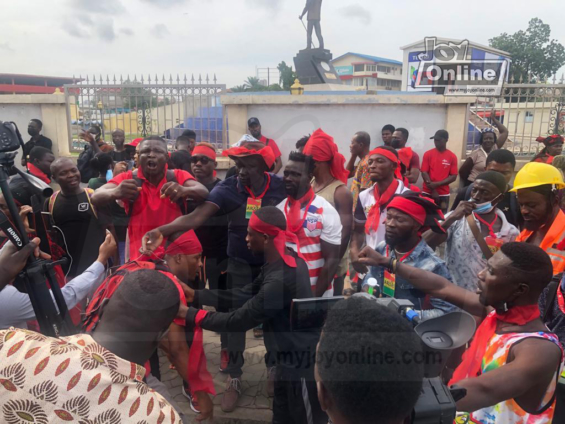 Some protesters in the ongoing Arise Ghana demonstration have asked President Akufo-Addo to step down if he cannot govern the country anymore.

The demonstrators who lamented the worsening economic difficulties asked the President to institute measures that will immediately bring relieve to them.

Some of them said, they cannot afford to eat twice a day, which is causing misunderstandings in their homes.

“If a minister is given money to construct a road, and he doesn’t do it and misuses the money, the constitution will cover him but go to China, when you misuse money, they will kill you by hanging,” one of them said in a JoyNews interview.

“So because of that, China is progressing. China is not a Christian country but look at them now. We go there for a visit and a holiday. So for me, I think we should change the constitution and tell Nana Addo that if he knows he cannot rule the country, he should step down. He is an old man. He has done his bit,” the same protester added.

Another protester also said, “We cannot buy anything in this country. Everyone is suffering. Ghanaians are suffering. Children are also suffering.”

Meanwhile, the protest which started around 8am on Tuesday morning has so far been successful.

A pressure group, Arise Ghana, and its associates are currently protesting against worsening economic conditions in the country from 3pm to 10pm, on Tuesday, June 28 and Wednesday, June 29.

They are asking the government to withdraw policies like the e-levy amongst others to cushion the suffering masses.