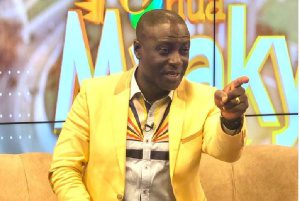 Media General has called out the National Media Commission (NMC) for what it terms as a hasty judgment over the arrest of its journalist, Captain Smart.

Blessed Godsbrain Smart, popularly known as Captain Smart, has been accused of making some unsavoury pronouncements that compromises the peace and security in the country.

The Commission, following his arrest in a statement indicated that the host of “Onua Maakye” in his comments called for an insurrection against the state of Ghana and its institutions.

“This, by all standards, crosses the line of robust and critical broadcasting and transforms your radio station into a megaphone of war,” the Commission warned.

Reacting to the NMC’s statement, Head of Station at Onua TV/ Onua FM, Bismark Nana Apianti in a press statement noted that the body supposed to ensure the promotion of freedom and independence of the media failed to comply with its settlement procedures prescribed by Act 449, 1993.

According to Media General, the Commission aside from breaching the law also misconstrued the outcry by Captain Smart against the E-levy as well as failed to exercise restraint and passed judgment in the shortest possible time.

“Most disturbing to us is how NMC, an independent body under Clause 167 of the 1992 Constitution and the National Media Commission Act, 1993 (Act 449) entrusted with ensuring the promotion of freedom and independence of the media will within 24 hours of the occurrence of the alleged broadcast and without just cause, write such a letter which seeks to pass “judgment” of an alleged wrong-doing on the part of Captain Smart, a journalist of Onua TV and Onua FM.

Our position is that the NMC could only have come to this conclusion because it did not have the full benefit of the alleged broadcast as the said broadcast by Captain Smart was taken out of context.”

In its defence, Media General has revealed that Chapter 12 of the 1992 Constitution guarantees the freedom and independence of the media with the requisite limitation contained therein.

“It is unfortunate for the NMC to prejudge and conclude on such a matter as contained in its letter without giving Captain Smart, Onua TV and Onua FM the opportunity to be heard,” the Kanda-based media house added.

In view of this, the company has demanded the immediate retraction of the letter released by the National Media Commission and the use of appropriate channels as stated under Act 449, 1993 in resolving these matters.

He provided a caution statement and was cautioned on the offense of offensive conduct conducive to the breach of peace of the country as provided under section 207 of the Criminal Act, 1960 (Act 29).

In Media General’s view, the arrest of its employee is of no coincidence, but rather a sign of the “intolerance increasingly creeping into the Ghanaian society.”

It has therefore admonished the police service to conduct a careful review of the entire statements made by Captain Smart.

DISCLAIMER: The Views, Comments, Opinions, Contributions and Statements made by Readers and Contributors on this platform do not necessarily represent the views or policy of Multimedia Group Limited.
Tags:
Captain Smart
Media General
National Media Commission (NMC)