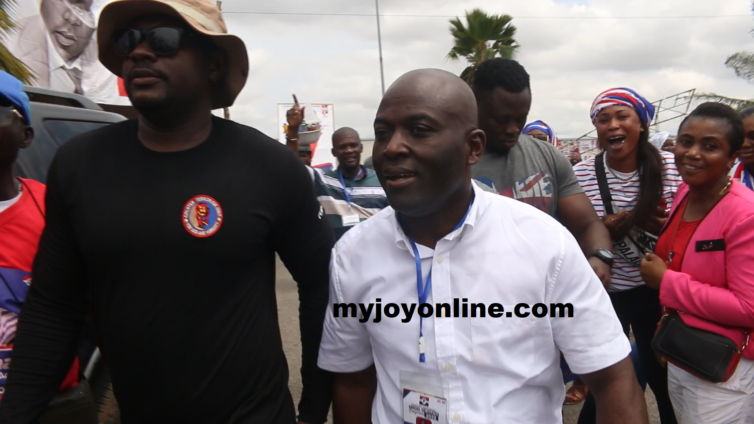 There’s tension at the Baba Yara Sports Stadium, in Kumasi, as the election of regional executives of the NPP has been put on hold for the second time.

This follows a move by one of the Ashanti Regional Chairman aspirants, Odeneho Kwaku Appiah, to block some members of TESCON from taking part in the election over eligibility claims.

The recent suspension of the exercise is the second today as it was earlier put on hold after members of the party from Obuasi East protested the exclusion of some names from the voters’ register.

Already, Mampong and Juaben have been exempted from voting.

The directive comes after the Election Committee resolved to exempt some delegates in some institutions from voting in the elections.

The protest from Odeneho Appiah got incumbent Ashanti Regional Chairman Bernard Antwi-Boasiako, who is vying for the third time, fuming.

While throwing a tantrum, Chairman Antwi-Boasiako described the protest from his opponent’s camp as baseless and a deliberate attempt to disenfranchise his strongholds.

But his call to allow TESCON members take part in the elections has been shot down by many of the aspirants who want the group’s participation to be put on hold.

Many of the aspirants want TESCON to be exempted with Odeneho leading the charge.

Among those who want TESCON members participation put on hold is the Member of Parliament for Bantama and Minister of  Works and Housing, Asenso Boakye.

Unhappy with this development, Mr Antwi-Boasiako threatened to call in his thugs to counter some thugs he claims to be affiliated with his closest contender, Chairman Odeneho Kwaku Appiah.

He is alleging that these thugs have been given accreditation to enter the stadium.

The elections are still on hold as leadership of the party tries to resolve the impasse.