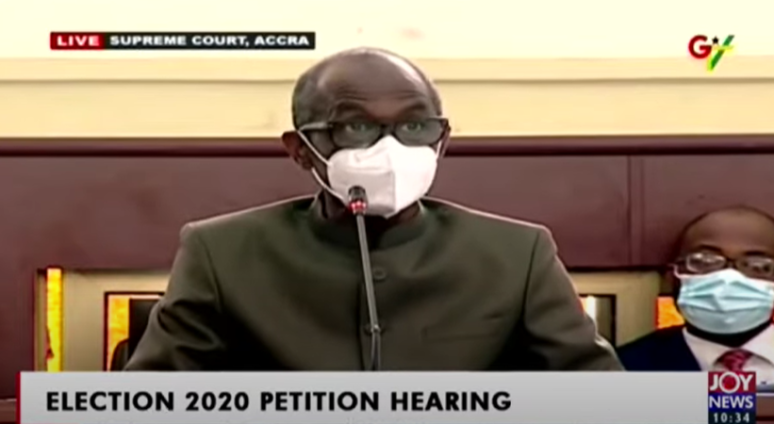 The Supreme Court says the petitioner in the just-ended election petition, John Mahama, failed to prove his case with the witnesses he called to testify on his behalf.

Reading the judgment on Thursday, Chief Justice Kwasi Anin-Yeboah said out of the three witnesses the petitioner named, only the testimony of the first witness, Johnson Asiedu Nketia was relevant to the case he had prayed the court to adjudicate.

He noted that the National Democratic Congress’ (NDC) General Secretary’s contribution was “emphatic” and “relevant” as compared to the second and third witnesses.

“Out of the three witnesses [the petitioner called], the one whose testimony appeared to have relevance to the issue as stake was Mr Johnson Asiedu Nketia (PW1). He was in fact the star witness of the petitioner. His testimony vividly explained the reason the petitioner is in court.

“As for the other two witnesses, that is, (PW2 and 3), Dr Kpessa Whyte and Mr Robert Mettle-Nunoo, the little said about their testimony related to the issue at stake, the better,” Justice Anin-Yeboah stated.

Moreover, the panel described the testimonies of Dr Michael Kpessa Whyte and Robert Mettle-Nunoo as a “fanciful tale”.

According to them, the allegations they made against the Electoral Commission Chairperson, Jean Adukwei Mensa does not hold water since they subsequently signed the regional summary sheets, they had complained to be riddled with anomalies.

“While the testimony of PW1 [Johnson Asiedu Nketia] was emphatic, that the petitioner is not in court to challenge or compare the figures or data presented by the 1st Respondent with any other figures.

“The testimonies of PW2 [Dr Kpessa Whyte] and 3 [Rojo Nunoo] were in respect of alleged irregularities in the figures or data on some of the collation forms that they sighted in the strong room but after which they ultimately signed or certified.

“Notwithstanding all these allegations of misunderstandings with staff of the 1st Respondent in the strong room and the fact that they were absent during the declaration they did not give any indication as to how these happenings and their absence affected the final results announced by the 1st Respondent,” Justice Anin-Yeboah read.

He continued, “Having signed or certified these forms, the witnesses, particularly, PW3, cannot turn round to talk of irregularities in the said forms. Their testimonies would have carried weight if the purpose of the petition was to challenge entries made by on the collation form or summary sheets but that is not the case.

“Their testimonies were, therefore, of no relevance to the issues set down for determination and we find them unworthy whatsoever in the settlement of the issues.”

The Apex Court further indicated that the second and the third witnesses for the petitioner should blame themselves for leaving the National Collation Centre, also known as the ‘strong room’.

According to the panel, Dr Kpessa Whyte and Mr Mettle-Nunoo were stationed at the strong room to observe the collation process on behalf of the petitioner, thus, must accept the consequences of abandoning their post.

“In fact, regarding the testimonies of PW2 and 3, if their evidence is to be believed then they have to blame themselves for abandoning their post at the National Collation Centre at a time the verification and certification of the result was ongoing,” he stated.

DISCLAIMER: The Views, Comments, Opinions, Contributions and Statements made by Readers and Contributors on this platform do not necessarily represent the views or policy of Multimedia Group Limited.
Tags:
December 7 Elections
Election Petition 2020
John Mahama
Johnson Asiedu Nketia
Supreme Court