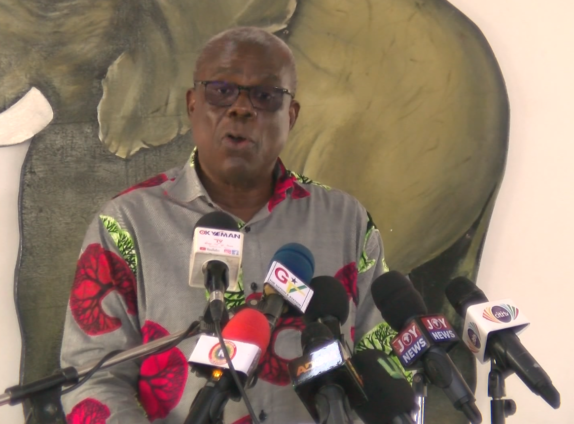 The National Election Committee of the New Patriotic Party (NPP) has warned against the mounting of billboards by aspirants in the party’s upcoming National Delegates Conference.

Addressing a presser on Wednesday, the Chairman of the Committee, Peter Mac Manu said even though aspirants are allowed to campaign, it should be devoid of the display of huge billboards.

According to him, aspirants who flout this regulation will be dealt with.

He also charged aspirants to be well comported in the prosecution of their respective campaigns.

“All aspirants and their respective supporters are hereby advised and cautioned, not to engage in a campaign of insults and or name calling.

But must rather conduct their campaigns with civility and decorum as has been the trait of the New Patriotic Party from time immemorial.

Any display of opulence, including but not limited to mounting of billboards is seriously frowned upon. And if infringing aspirants will be dealt with accordingly”, he warned.

On July 16, the New Patriotic Party will elect a new crop of leaders to steer the affairs of the party, ahead of the 2024 elections.

The upcoming contest, has so far generated a lot of anticipation amongst party faithfuls, thus the directive by the party’s National Election Committee which aims at ensuring a smooth and incident-free process.

In that regard, the Committee has also stressed that the party will not countenance any acts of bribery and vote-buying in its upcoming national delegates election.

According to Mr Mac Manu, such acts undermine the country’s constitutional democracy and therefore, his outfit will take steps to prevent its occurrence.

“All aspirants and or their agents are therefore warned not to engage in any untoward behaviour that can be interpreted as bribery or treating within the meaning of the Representative of People’s Law 1992, PNDC Law 284, which are serious criminal offences.

The National Election Committee has therefore engaged the Ghana Police Service who will be on the election grounds to strictly enforce the laws and arrest anyone found to be in the breach of PNDC law 284. There’s a law in this country that covers treating and bribery and we’re going to enforce it”, he cautioned at Wednesday’s press conference.

Meanwhile, aspirants who have been cleared to contest in the party’s national elections in July, are busily embarking on field campaigns and media engagements to convince electorates.

But speaking ahead of the NPP’s National Delegates Conference to be held on July 16, Mr Peter Mac Manu announced that Mr Otoo has withdrawn his candidature.

According to Mr. Mac Manu, the former appointee made this known in a letter on Monday, July 4, 2022.