AU: terrorism ecosystem evolving towards nexus between terrorism, others - MyJoyOnline.com

AU: terrorism ecosystem evolving towards nexus between terrorism, others 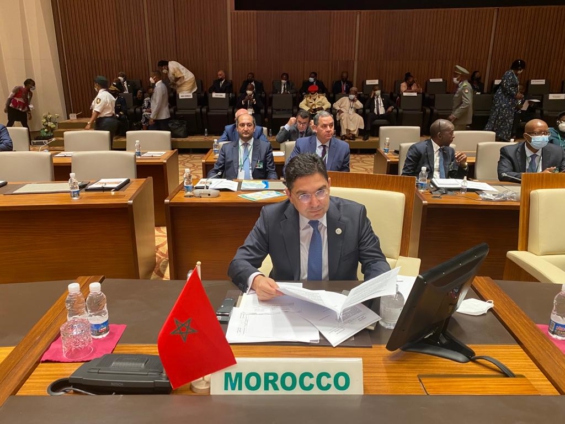 The terrorist threat in Africa is becoming more aggressive, with the appearance of new groups that adapt to national and regional responses, to better target chaos and profit.

This was underlined today May 28th, 2022 in Malabo by the Minister of Foreign Affairs, African Cooperation and Moroccans Abroad, Nasser Bourita.

He noted that the ecosystem of terrorism is evolving towards a nexus between terrorism, separatism and criminality.

Mr. Bourita, who represents HM King Mohammed VI in the Extraordinary Summit on Terrorism and Unconstitutional Changes of Government of the African Union (AU), which opened on Saturday, stressed that the 85 member states of the Global Coalition to Defeat ISIS, which meet in Marrakech on May 11, 2022 recorded these changes, which the Dakar International Forum on Peace and Security, held in 2016, under the chairmanship of Macky Sall had anticipated.

“In the face of this mutating threat, our collective strength has never been so much a function of our individual vulnerabilities”, said Mr. Bourita.

Moreover, the Minister pointed out that dwelling once again on this theme of terrorism and unconstitutional changes of governments reflects a concern that is very relevant.

“Relevant in view of the challenging situation that Africa is going through, marked by a succession, even a concomitance, of crises, security in this case, which leaves no respite,” he explained.

“Relevant, too, in that it reflects a lucid look at the evolution of the terrorist phenomenon in Africa; and in particular this ability that it acquires to take on the colors of all the evils on which it feeds: instability, insecurity, precariousness and separatism”, he noted.

In this regard, the Minister pointed out that the continent’s security indicators are turning red, one after the other, adding that this is a sign of the “mixed” operational assessment of the AU Action Plan on the prevention and the fight against terrorism adopted in 2002.

But, he said, if it has not made it possible to structure an effective response at the continental level, this Action Plan will have had the merit of existing, and of advocating for the strengthening of a legal framework which can be very useful in the future.

Mr. Bourita said there shouldn’t be the neglect of any political or operational space, any source of national or regional tension; and, above all, leave no country behind.

In this regard, the Minister regretted Mali’s decision to withdraw from the G5-Sahel which he described as “very bad news to ponder”, expressing the wish that this brotherly country, whose commitment against terrorism is well known, and can quickly recover its place in “our collective response”.

On the other hand, the Moroccan Minister welcomed Mauritania’s efforts in this area, calling, once again, for a truly strategic continental action against terrorism.

This, he underlined, can only be conceived within a global and integrated approach combining security action, economic and social action; and cultural and religious action.