Audio:These are 3 things that separate Mahama and I – Akufo-Addo 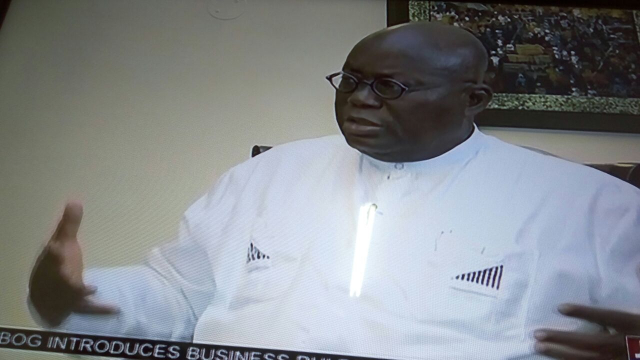 New Patriotic Party (NPP) Presidential Candidate, Nana Addo Dankwa Akufo-Addo has listed three differences between him and the president which should leave voters in no doubt that he will be a better president.

The NPP Presidential candidate explained that this difference can be seen in how with GHC 20 billion the NPP implemented strategic social policy intervention programmes across the country.

He cited the National Health Insurance Scheme (NHIS) which was birthed under the erstwhile John Kufuor administration to provide quality healthcare services to Ghanaians.

This, he said is contrasted with the GHC 248 billion the National Democratic Congress (NDC) government has had under President John Mahama yet government cannot point to any significant social programmes it has undertaken in eight years.

The NPP leader was speaking in a joint interview with Joy FM/Citi FM Friday with crucial general elections set for Wednesday, December 7.

Other social policies Nana Akufo-Addo mentioned included the Livelihood Empowerment Against Poverty (LEAP), Ghana School Feeding Programme (GSFP), and Capitation Grant which were introduced with a meager revenue base of GHC20bn.

With four days to the presidential and parliamentary elections, sections of Ghanaians have said there is no difference between a government of NPP and NDC. To those Ghanaians, the two dominating parties behaved in the same manner when they are voted for.

But Nana Akufo-Addo said there are three fundamental things that differentiate the NPP's management of the economy from the NDC.

According to him, the second reason is that the NPP has demonstrated that it has a development plan and the mental discipline to follow through any vision set for the nation.

For the NPP flagbearer, the third difference is that in the NPP, its men have a 'minimum level of integrity' which he believes is glaringly absent in the NDC.

Otherwise, why would the NDC government be buffeted by corruption stories on a regular basis, he suggested.

"Every year we hear one or the other scandal – GYEEDA, AMERI, SUBAH, Woyome, violations of the public procurement law and the excessive use of sole-sourcing to share contracts among family and friends," he explained.