Australia’s biggest newspaper rivals have made a rare showing of unity by publishing redacted front pages in a protest against press restrictions.

The protest is aimed at national security laws which journalists say have stifled reporting and created a “culture of secrecy” in Australia.

The government said it backed press freedom but “no one was above the law”.

In June, police raids on the Australian Broadcasting Corporation (ABC) and the home of a News Corp Australia journalist generated a huge backlash.

The media organisations said the raids had been conducted over articles which had relied on leaks from whistleblowers. One detailed allegations of war crimes, while the other reported an alleged attempt by a government agency to spy on Australian citizens.

The campaign on Monday, by the Right to Know Coalition, was also supported by several TV, radio and online outlets.

Michael Miller, executive chairman of News Corp Australia, tweeted an image of his blacked-out mastheads which include The Australian and The Daily Telegraph. He urged the public to ask of the government: “What are they trying to hide from me?” 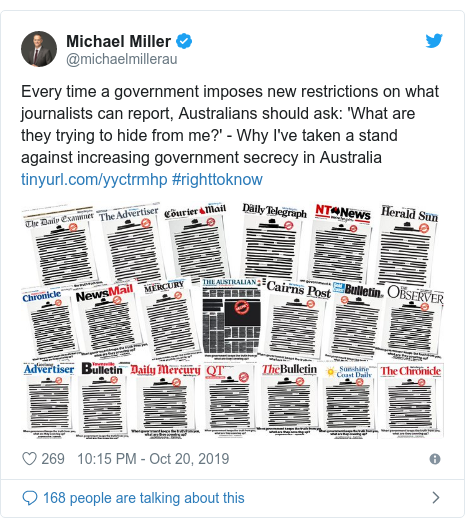 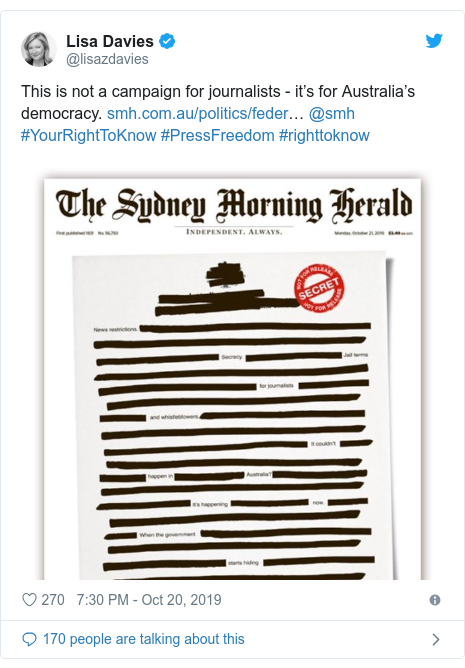 On Sunday, the Australian government reiterated it was possible that three journalists may face prosecution in the wake of the raids.

Prime Minister Scott Morrison said press freedom was important to Australia’s democracy, but added the “rule of law” needed to be upheld.

“That includes me, or any journalist, or anyone else,” he said on Sunday. 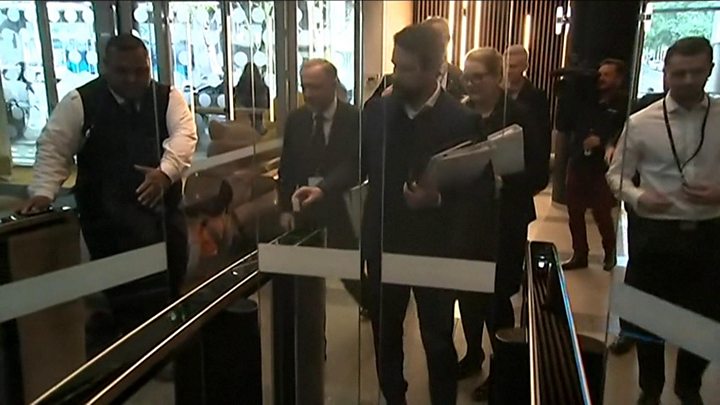 The findings of a press freedom inquiry will be tabled in parliament next year.

What do the media organisations want?

The campaign argues that tougher security laws enacted over the past two decades have threatened investigative journalism, eroding the public’s “right to know”.

Since new counter-espionage legislation was introduced last year, media outlets have lobbied for journalists and whistleblowers to be given exemptions to report sensitive information.

This forms part of a list of seven demands put to the government on Monday which also call for reforms to freedom of information and defamation laws.

You wouldn’t typically expect Australian media chiefs to shelve their competitive instincts – if not occasional hostilities – to publish identical messages on their most prized news pages and bulletins.

But the police raids had an immediate galvanising effect on the nation’s press, stirring them into a co-ordinated response. Some have described the unity as unprecedented.

The firms have sought to nullify possible criticisms of self-interest by arguing that Australian society is best served by more open scrutiny.

They argue Australia is weaker than comparable democracies at protecting whistleblowers and has unfairly strong defamation laws which effectively silence reporting.

Together the outlets wield significant power, but it remains to be seen if their demands will be met.