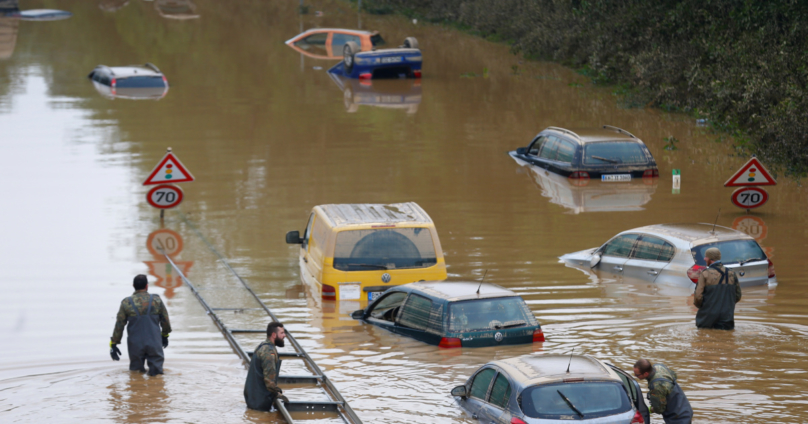 A week after meteorologists recorded two months of rain in two days over western Germany, the number of fatalities has increased to at least 171, of which 123 have been confirmed in the hilly Ahrweiler district in Rhineland-Palatinate.

Another 764 people have been injured, and 155 people are still missing.

The flood disaster in Germany has caused global turmoil and discussions on how people died in western Germany.

Around 40,000 people have been reportedly affected by the floods in the wine-growing Ahr valley and regions in neighbouring North-Rhine Westphalia.

The devastating floods have left thousands of people in western Germany without access to clean water, electricity, and gas.

The extent of damage to the area’s infrastructure has only increased since the waters have completely subsided a few days ago.

Research officer at the Grantham Research Institute on Climate Change and the Environment says Africans should learn from European countries’ mistakes and not repeat them.

Dr Viktor Roezer says how Europe has designed its urban drainage systems and treated natural habitats in the past comes to haunt them today.

“Europe is the first continent to be industrialized. We have really long legacy of old drainage infrastructure, and old buildings,” he said.

He says most drainage systems in Europe are outdated and over 100 years old.

“They now need to be replaced, which means they need to be dug oped all the streets and put new pipes,”

Dr Roezer who also works as a research officer on the Zurich Flood Resilience Alliance (ZFRA) project indicates most European countries have destroyed natural habitats that could have absorbed a lot more water.

“We have destroyed a lot of our natural habitat in terms of natural forest that can absorb a lot more water,”

He says Africa has many opportunities to avoid repeating the EU’s mistakes and value the natural environment to protect lives.

“In Europe, we start by building but now we are trying to fix those mistakes but it is a long process. But if you don’t destroy the natural environment, you are in a much better place to be safe,”

He urges Africa to do what it takes to build proper structures, recognizing  that, they must be adapted to the impacts of climate change.

“Africa has a young population and relatively new infrastructure would be built,” he said.

According to Dr. Roezer, Europe has a long legacy of old technology, especially in Germany. But Africa could essentially leapfrog many old technologies and move directly to cellphone broadcasting for early warning systems.

Answering questions on what could have led to flood disaster in Germany, he tells JoyNews Mahmud Mohammed-Nurudeen failure in risk management caused them.

Just like some people especially in Africa who believe developed countries like Germany should not come this far, Dr Roezer has the same notion.

He says a country with all the technologies and resources to set up a working early warning system but fails to do that because Germany was considered a safe state.

Dr Roezer says these events like the devastating flood in Germany would happen often more, but it is not something one can’t prepare for it, at least, in terms of saving lives.

“We can’t really blame climate change for the high amount of fatalities. I think that discussed can easily cover up apparent issues we have in our risk management.”

DISCLAIMER: The Views, Comments, Opinions, Contributions and Statements made by Readers and Contributors on this platform do not necessarily represent the views or policy of Multimedia Group Limited.
Tags:
Africa
Dr Viktor Roezer
European Union
Germany