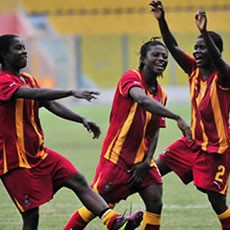 Ghana’s hopes of reaching the 2014 African Women’s Championship received a significant boost after winning 3-0 against Burkina Faso on Sunday.

The Black Queens will go into the return leg in Accra with a three-goal advantage, as they attempt to return to the Championship after missing out for the first time in 2012 since the inception of the biennial tournament in 1998.

All three goals came in the first half of the match in Ouagadougou.

A double from Faiza Ibrahim and a goal by Agnes Aduako handed Ghana an important lead as they stay on cause for one of the seven places up for grabs in the final tournament to be staged by Namibia in October later this year.

Faiza started the rout in the 3rd minute with her first of the evening before Aduako made it 2-0 for Ghana in the 16th minute.

Eight minutes later, Faiza was on hand again to make it three-nil to cushion coach Yussif Basigi’s side ahead of the return game on the weekend of February 28 – March 2, 2014.

The winners of the two-leg first-round matches will progress to the second round to join African champions, Equatorial Guinea, South Africa and Cameroon, who drew a bye in the first round.