'AZ Alkmaar is a perfect step for me' - Kamal Sowah - MyJoyOnline.com

‘AZ Alkmaar is a perfect step for me’ – Kamal Sowah 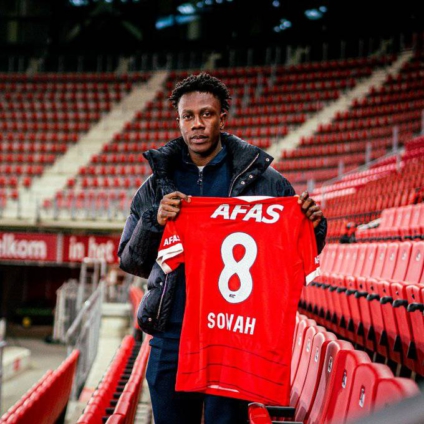 Highly-rated Ghanaian youngster, Kamal Sowah says his transfer move to Dutch side, AZ Alkmaar is a step in the right direction for him.

The midfielder sealed a deadline day move to the Eredivsie on loan from Club Brugge in the winter transfer window, with the deal expected to last until the end of the 2021/22 campaign.

Sowah joined Club Brugge last summer from Premier League side, Leicester City but has failed to nail down a starting spot in Alfred Schreuder’s team, forcing him to join Alkmaar.

Speaking to the club’s website after completing the deal, the 22-year-old said, “I see AZ as the perfect step for me. The club made a good first impression and the ambition appeals to.”

“I am an agile player and good on the ball. In addition, I am also a team player. I see myself as a winger, but I can play in several positions.”

Sowah, who was born in Ghana left Right to Dream to join the Foxes after a successful trial in 2018.

Since moving to Club Brugge, the versatile player had started just five league games with four substitute appearances. He has also provided one assist during that time.