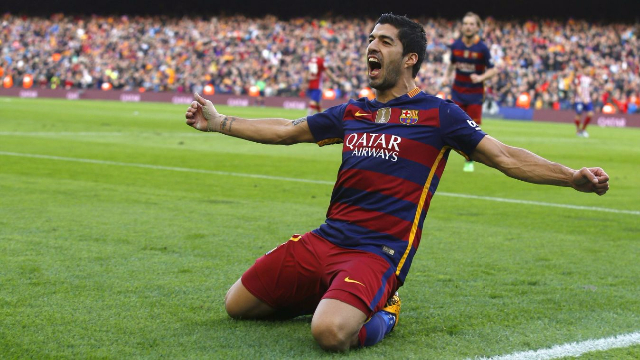 Barcelona came from behind to beat an indisciplined Atletico Madrid side 2-1 at the Camp Nou to take a three-point lead in the Liga title race.

Barcelona came from behind to beat an indisciplined Atletico Madrid side 2-1 at the Camp Nou to take a three-point lead in La Liga title race.

Atletico Madrid took a surprise lead when Koke converted Saul Niguez’s cross from the right, and their disciplined defence had Barcelona rattled.

They could only hang on for so long against the home side’s pressure, and Lionel Messi equalised with a neat finish. Luis Suarez added a second soon after.

The match descended into intermittent aggression when Filipe Luis was sent off for leaving his studs in on Messi, finishing a feud that Luis had initiated earlier. Diego Godin got his second yellow for a ludicrous challenge on Suarez. Somehow Atletico held on without conceding another, despite being down to nine men for almost half an hour.

Barcelona extended their lead at the top to three points with a game in hand, and Real Madrid now have the chance to narrow the gap with Atletico to just a point.