Bawumia brings Tamale to a standstill 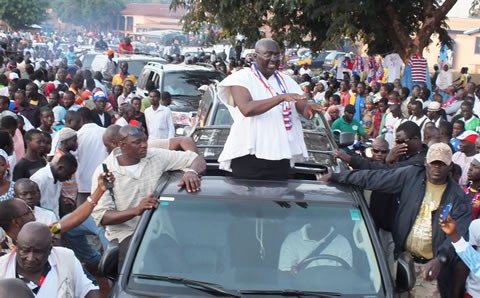 The Tamale Metropolis was brought to a standstill on Wednesday, when the 2012 Vice Presidential Candidate of the New Patriotic Party, Dr. Mahamudu Bawumia, arrived in the city to a rousing welcome from inhabitants of the city who escorted Dr. Bawumia from the outskirts of the city to the Zoegbeli Park where he addressed a mammoth rally.

Arriving in the Northern Region from his eight (8) day tour of Brong Ahafo, Dr. Bawumia first paid courtesy calls on the chiefs of Yapei and Kusawgu where he sought their support and prayers for the task ahead.

Dr. Bawumia then stopped at Sankpagla where he addressed a community durbar of the chiefs and people.

However, even before Dr. Bawumia could finish addressing the people of Sankpagla, over 400 motor cyclists from the Tamale metropolis who could no longer wait to see the Vice-Presidential candidate of the NPP descended on Sankpagla to escort Dr. Bawumia to Tamale.

The highway from Sankpagla to Tamale was immediately taken over by onlookers and crowds who all wanted to catch a glimpse of Dr. Bawumia and joined the escorting party to the Tamale Metropolis. Passengers in vehicles moving toward Tamale readily joined the thousands of escorts, cheering and waving as the convoy moved slowly into the Tamale City.

The situation in the Tamale metropolis when the team finally arrived, after almost an hour of slow procession, was even more exciting as thousands of people and even more cyclists joined the spectacle making the procession to the Zoegbeli Park even slower. Not even the dawn of darkness could convince the over 5,000 people and cyclists who were escorting Dr. Bawumia of the need to hasten the pace of the procession.

It took Dr. Bawumia and his team another two hours of procession to get to the rally grounds from the entrance into the city as men and women of all ages and children lined the streets in their numbers to cheer the man poised to become Ghana’s Vice-President come January 7th 2013 with chants of “Change Is Here”, “Free Education” and “We are Moving Forward” dominating. The size of the crowd escorting Dr. Bawumia meant that for over two hours, all activities on the roads, pavements and adjoining areas used by the convoy had to cease.

The mood at the Zoegbeli Park was electrifying as the tens of thousands of people who had defied a heavy rainstorm in the morning and onset of darkness finally set eyes on Dr. Mahamudu Bawumia after some five hours of waiting.
The atmosphere became more charged when Dr. Bawumia mounted the platform to respond to the deafening cheers and chants of the thousands present.

Speaking at the Rally, Dr. Bawumia thanked the people of Tamale for demonstrating their true love for him as a true son of the city. He urged the people of the North to support Nana Akufo-Addo massively as he had the proven competence, vision and commitment to see the North develop and bridge the gap between south and north.

“On behalf of Nana Akufo-Addo, I am assuring all, that we would do the necessary hard work of selling our message of hope and transformation from hamlet to hamlet, village to village, town to town, city to city in Northern Ghana. We won’t leave any inch of space unaccounted for in this task of restoring hope to the North and when we are done, we know that the people of the North would reject the politics of deceit, propaganda and lies and fully endorse Nana Akufo-Addo and myself to lead us to the era of transformation we all dream of”, he said.