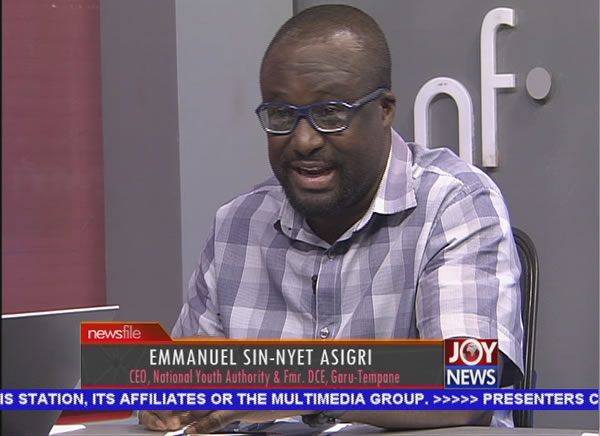 Government statement revealing the Vice-President Dr. Mahamudu Bawumia is under medical treatment demonstrates a desire not to treat the health of leaders as a state secret.

The CEO of the National Youth Authority (NYA) said the Vice-President is as human as everyone else, adding news that he is unwell should not alarm Ghanaians.

Emmanuel Asigri said it should be expected that as hardworking as the Vice-President is, he will be susceptible to exhaustion and medical supervision.

"I think he has over-stretched his body", he said on Multi TV Newsfile Saturday.

The government appointee said he spent some time with the Vice-President on Thursday to invite him to an upcoming NYA event.

"Sitting with him in his living room he looked so healthy", he revealed.

But less than 24 hours later a statement from the presidency said doctors were attending to the vice-president after he reported feeling "unwell".

His wife and 'Second Lady' Samira Bawumia was absent from the commissioning of a maternity block which together with the First Lady they helped to raise funding for its construction.

Asigri admits the news has brought some apprehension for Ghanaians especially with the tragic history of losing a sitting President Evans Atta Mills in 2012.

Questions have been raised about the need for the statement if the Vice-President's health was not critical.

But Emmanuel Asigri wants Ghanaians to accept, the government is fostering a culture of disclosure when it comes to the health state of its leaders.

"…as a country, we move away from keeping some of these things as a secret", he said.

The NYA CEO said the revelation from the Presidency is consistent with the style of President Akufo-Addo who also introduced an "innovation" when he named his government.

The President called a press conference where he named his ministers and explained reasons for his choice, a move many applauded.

"If you put yourself out up to the highest office of this land, your health is directly related to the well-being of the country…of course some details must be left out", he added.

NDC MP North Tongu Samuel Okudzeto asked for Christians to pray for the health of the Vice-President.

"By his stripes, we are healed", the Christian MP quoted ‎Isaiah 53:5.

The Minority NDC MP said he hoped for further updates on the health of the Vice-President as the government has promised.

He, however, conceded that everyone is entitled to a degree of privacy when it comes to health records and is therefore open to disappointment if no further details are released.

He referred to a call by Progressive Peoples' Party (PPP) Presidential candidate Paa Kwesi Nduom who released personal records of his health to back his call for people vying for the president to release same.

Veteran journalist Kweku Baako warned against any religious over-exaggerations into the health of the Vice-President.

"People are going to capitalise on it and do all sort of prophetic scare-mongering. I have a problem with that," he said.

Baako, a Muslim, said despite his belief in God, he disapproves of the Ghanaian tendency to read religious meanings into everything.