BBC staff complain after presenter is rebuked for calling out Trump 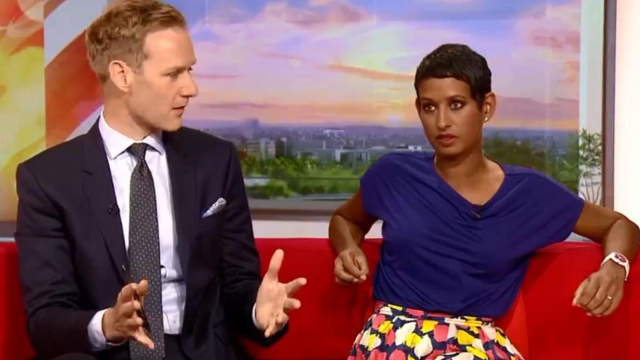 BBC staff have publicly turned on their employer after the Breakfast show presenter Naga Munchetty was found to have breached the corporation’s editorial guidelines after criticising Donald Trump for telling black politicians to “go home”.

Munchetty was ruled to have overstepped the mark when she put comments by the US president in the context of racism. Furious staff have pointed out that the complaints unit is dominated by older white men who may not understand the true impact of Trump’s words.

“Every time I have been told, as a woman of colour, to go back to where I came from, that was embedded in racism,” Munchetty told viewers in July, during a discussion with her co-host Dan Walker. She went on to add that she was “absolutely furious a man in that position thinks it’s OK to skirt the lines by using language like that”.

Sangita Myska, a BBC correspondent, said “there is a lot of bewilderment among BAME staff” about the decision, while the former China editor Carrie Gracie has said the ruling was perplexing given “telling the truth and celebrating diversity” is a core BBC value and “we speak out when something is not right”.

The Newsnight correspondent Gabriel Gatehouse said: “I propose a little thought experiment: if a BBC presenter suggested on air that a black Brit should ‘go back to where they came from’ and viewers complained the remark was racist, would the BBC uphold such a complaint? One would hope so.”

They were joined by the Labour leader, Jeremy Corbyn, who said the BBC would have to explain this “astonishing decision”.

“Naga Munchetty stated a fact. She shared experiences of racism she’s suffered. That can’t be at odds with any editorial guidelines,” he said.

The decision to reprimand Munchetty, which followed a single complaint from a member of the public, was made by the BBC’s executive complaints unit, a committee that rules on contentious issues. The membership of the group is not public but internal BBC documents suggest it is a seven-strong group featuring only two women.

A number of BBC presenters and journalists have said they are considering writing to the director general, Tony Hall, to ask for the decision to be reviewed before it causes further damage to the corporation’s public standing, especially among BAME communities. There is particular anger about the ruling given Munchetty’s comments were made in response to questions from Walker, who was asking for her personal experience of racist language.

Managers have also been telling journalists in news and current affairs departments to avoid tweeting their support for Munchetty or discussing the incident with other news outlets, warning that public criticism of the decision could result in disciplinary action for those who speak out.

Staff privately expressed exasperation that the BBC has allowed a single complaint from a member of the public to blow up into another damaging row for the corporation. The clip of Munchetty’s short exchange with Walker briefly went viral in the summer, earning hundreds of thousands of views and remains on BBC Breakfast social media accounts, but had largely been forgotten until the recent ruling.

In an updated statement the BBC said Trump’s comments were widely condemned as racist and that Munchetty was perfectly entitled to give her personal response to the president’s words. However, she was found to have breached editorial guidelines because BBC journalists are not allowed to “give their opinions about the individual making the remarks or their motives for doing so”.

Senior journalists privately complain that news executives are struggling with how to handle persistent complaints from rightwing campaigners about the corporation’s perceived leftwing biases, creating the internal perception that bosses are overcompensating following the 2016 Brexit referendum amid an ongoing culture war.

At the same time the BBC management is increasingly facing internal clashes with its own journalists who are publicly calling out the corporation when they feel it is falling short on issues relating to diversity – both internally and on-screen. This then causes clashes over which topics are legitimate topics of discussion for the corporation’s television and radio shows and which are not up for debate.

Earlier this year, the BBC reminded staff not to tweet their personal views, after employees publicly objected to BBC programmes hosting discussions that debated the rights and wrongs of teaching children about tolerance for LGBT people.

Munchetty did not respond to a request for comment.