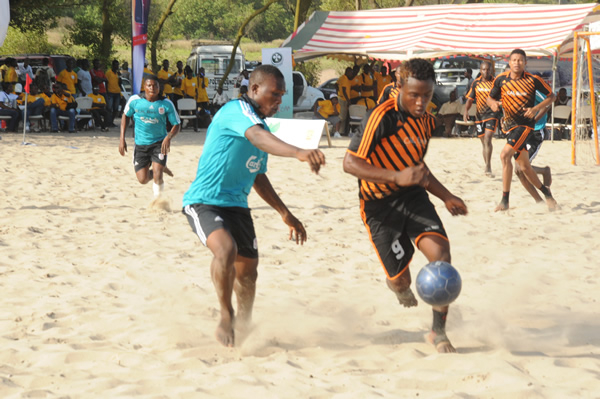 The walk is in the association’s bid to raise interest, create awareness and also engage potential sponsors and donors to the rapidly growing sport.

Executives, club officials, players and members of the association will partake in the walk.

President of the Ghana Beach Soccer Association (GBSA), Yaw Ampofo Ankrah and the acting Vice Fred Afful will lead the walk through the Osu Oxford Street in Accra.

Yaw Ampofo Ankrah said the aim of the walk was to “to introduce the game, the players and the people who run it to the business community, shop owners and numerous stakeholders in Osu through interactions, the distribution of leaflets, sharing of ideas and even photo snap shots for social media use along the route''.

The national team players of Ghana Beach soccer; Black Sharks, will also be involved in the two hour walk to create a fun atmosphere.

The Black Sharks failed in their bid to qualify for the World Cup in Portugal on goal difference after losing to Morocco and eventual Champions Madagascar but impressed with wins over number one ranked Senegal (5-3) and host nation Seychelles (13-2).

Spokesperson for Beach Soccer Ghana, George Addo says he believes that engaging with potential beach soccer fans, donors and sponsors in this unique manner can only yield positive results.

''We will also take the opportunity of the ''We are Ghana Beach Soccer'' walk, to appeal for support especially for clubs preparing for the start of the new season in a few weeks time.

“The media has been a solid partner of beach soccer and we wish for that relationship to be strengthened", he added.

Beach Soccer Ghana is also set to hold a pre-season congress next week where the GBSA is expected to re-admit clubs that were expelled last season back to their fold.

A workshop for cub officials and coaches will also be held ahead of the new season.

Both FIFA and CAF have promised to support beach soccer in Africa through Beach Soccer Worldwide and for this reason, the association is seeking to sharpen rough edges to justify their demands for assistance and investment.

CAL Bank remains the headline sponsor of the Championship league as well as the national team Black Sharks team.

The league is co-sponsored by Voltic Mineral Water.