Bear with us on border closure – Oppong-Nkrumah 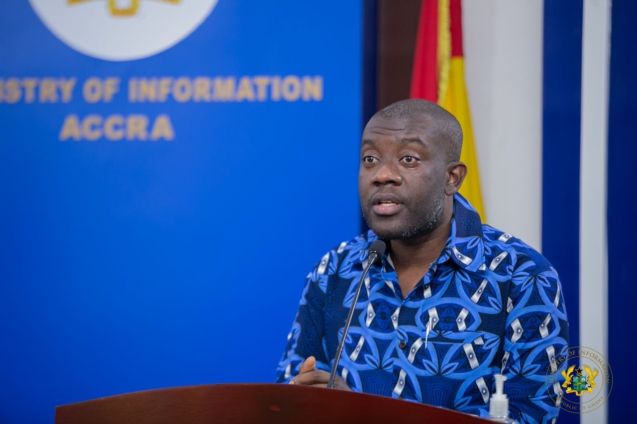 The Minister of Information, Kojo Oppong-Nkrumah has urged residents of border communities to bear with the government’s decision on the continuous closure of the country’s land borders.

Citizens including those in Aflao, home to the busiest border in Ghana had on several instances which included staging a demonstration, called on the government to open and regulate the borders to mitigate the economic and other hardships the closure had brought on them.

Ghana’s borders (air, land and sea) were closed to human traffic from midnight of Sunday, March 22, 2020, following the outbreak of the Covid-19 pandemic as part of measures to contain and prevent the spread of Covid-19 in the country with the air borders later opened.

Mr Nkrumah, responding to the concerns about the border closure when he engaged the media on a duty tour in the Volta Region said the over a year and a half closure currently inconveniencing the citizenry, in particular, border residents was meant to safeguard the lives of people.

He noted that the government was uncomfortable taking that inconveniencing decision but had to do so in the interest of all hoping the outcomes of regular consultations with public health experts would recommend the opening of the land borders as was the case leading to the opening of the air borders saying, “government is willing to open the borders.”

Mr Nkrumah said the concerns of people in Ketu South as being the Municipality hit hardest by the border closure directive considering its attendant economic implications without any interventions programmes tailored for them would be looked into for the needed action.

The Minister’s visit to the region as part of his nationwide tour which saw him visiting the regional offices of the Ghana News Agency, Ghana Broadcasting Corporation and Information Services Department was to share key programmes the government was delivering and to gather feedback to shape the government’s policies and programmes to benefit the people.

He urged the media to play a crucial role in supporting efforts being made by the government to ensure the country’s “quick recovery from the Covid-19 pandemic” by educating the public on the reality and existence of the pandemic, encouraging them to take the Covid-19 vaccines and to strictly observe the preventive etiquettes.

Mr Nkrumah said the government was stimulating the injection of GH¢100 billion raised from government treasury and private investment into the economy under the ‘Ghana Cares Obatanpa’ project and asked the media to help educate the public to take advantage to create jobs.

“If a country is an aggregate of what you feel at home and what you’re seeing in your business, how can we say that the country has not been affected by Covif-19 and that the government is just exaggerating,” the Minister wondered at those underestimating the impact of the pandemic on the economy and rather blaming the government for the economic slowdown saying, “it cannot be the case.”

The Minister also disclosed the Ministry was collaborating with other organisations for media support programmes; a coordinated mechanism on the safety of journalists and media capacity enhancement which would ultimately seek to protect journalists and enrich their work.

DISCLAIMER: The Views, Comments, Opinions, Contributions and Statements made by Readers and Contributors on this platform do not necessarily represent the views or policy of Multimedia Group Limited.
Tags:
Covid-19
Information Ministry
Kojo Oppong-Nkrumah
Volta Region