Belgian sanctioned by US for smuggling DR Congo gold - MyJoyOnline.com

Belgian sanctioned by US for smuggling DR Congo gold 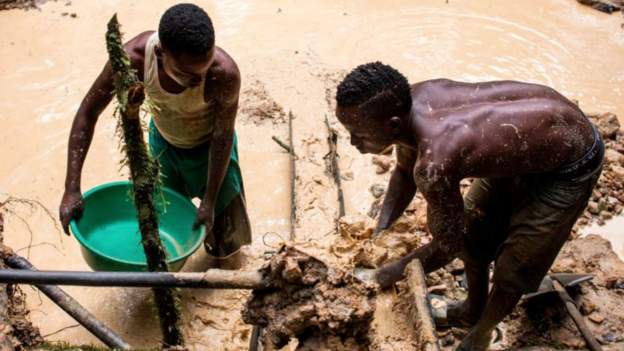 Belgian gold dealer Alain Goetz and a network of companies have been sanctioned by the US for allegedly smuggling hundreds of millions of dollars’ worth of gold from the Democratic Republic of Congo.

The US government says since 2016 Mr Goetz has been trading illegally in gold that has come from Congolese mines controlled by armed groups who often use forced labour or exploit miners.

“Alain Goetz and his network have contributed to armed conflict by receiving DRC gold without questioning its origin,” he said.

Mr Goetz, who operates the African Gold Refinery, one of the firms sanctioned, denies the allegations.

He told the Associated Press agency the move would undermine his efforts to improve transparency: “International organisations can now easily verify information and quote figures because of the transparency that I laid a foundation for with the launch of African Gold Refinery.”

The majority of DR Congo’s population do not benefit from the country’s vast mineral wealth, with many living on less than $2 (£1.50) a day.

The US government estimates that 90% of gold from DR Congo is smuggled out of the country – much of it to Uganda and Rwanda -before it is sold on to international markets.