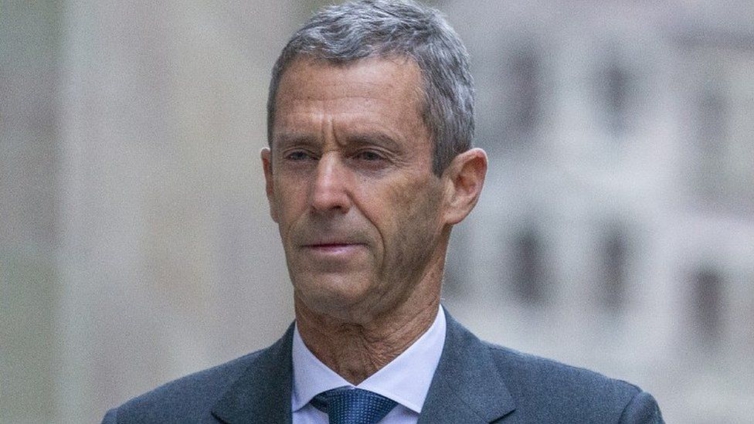 Beny Steinmetz arriving for the trial: he denies any wrongdoing

A billionaire French-Israeli diamond magnate, Beny Steinmetz, has arrived in court in Switzerland to face trial over alleged corruption linked to a major mining deal in Guinea.

He travelled to Geneva from Israel for the two-week trial.

If convicted he could face up to 10 years in prison.

Steinmetz, 64, was previously sentenced in absentia to five years in prison by a court in Romania for money laundering.

Swiss prosecutors say Steinmetz paid about $10m (£7.4m) in bribes, in part through Swiss bank accounts, to gain the rights to Guinea’s iron ore deposits in the Simandou mountains.

The area is believed to contain the world’s largest untapped iron ore deposits.

His lawyer Marc Bonnant says “we will plead his innocence”.

According to the prosecutors, the bribes to Guinean public officials were paid with the help of Mamadie Toure, the widow of Guinea’s former president Lansana Conte. They also allege that Steinmetz forged documents linked to the deal.

The BBC’s Imogen Foulkes in Geneva says Ms Toure has been described as the star witness for the prosecution, but her presence in court is unlikely – she now lives in the United States. She has not yet commented on this trial.

Mr Bonnant told Reuters news agency last month that Steinmetz had “never paid a cent to Mme Mamadie Toure” and said she was not married to Lansana Conte. “She is not a public agent and therefore cannot be corrupted,” he said.

Despite its vast natural resources, Guinea remains one of the poorest countries in Africa, and has gained little from the Simandou iron ore riches.

DISCLAIMER: The Views, Comments, Opinions, Contributions and Statements made by Readers and Contributors on this platform do not necessarily represent the views or policy of Multimedia Group Limited.
Tags:
Beny Steinmetz
Guinea
Switzerland