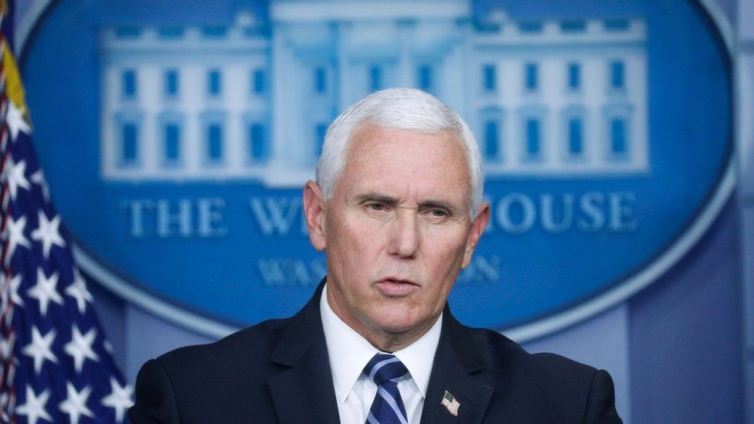 US Vice-President Mike Pence has welcomed an effort by a group of senators to refuse to certify Joe Biden’s presidential election win.

The 11 Republican senators and senators-elect, led by Ted Cruz, want a 10-day delay to audit unsubstantiated allegations of election fraud.

The move is certain to fail as most senators are expected to endorse Mr Biden in the 6 January vote.

Mr Biden, a Democrat, is due to be inaugurated as president on 20 January.

Mr Pence has stopped short of echoing allegations of election fraud. But on Saturday, his chief of staff Marc Short said Mr Pence shared what he called “the concerns of millions of Americans about voter fraud and irregularities”.

Mr Pence “welcomes the efforts of members of the House and Senate to use the authority they have under the law to raise objections and bring forward evidence before the Congress and the American people”, Mr Short said.

As president of the Senate, Mr Pence will have the responsibility of overseeing the session on 6 January and declaring Mr Biden the winner.

All 50 states have certified the election result, some after recounts and legal appeals.

So far, US courts have rejected 60 challenges to Mr Biden’s win. Mr Trump has notched up only one minor victory, concerning a small number of postal ballots in Pennsylvania, a state won by Mr Biden.

What do Trump allies want?

In a statement, the 11 senators led by Texas Senator Ted Cruz said November’s election had “featured unprecedented allegations of voter fraud, violations and lax enforcement of election law, and other voting irregularities”.

An investigation by the federal Department of Justice (DOJ) found no evidence to back any claims of fraud.

Citing a precedent from 1877 – when a bi-partisan committee was formed to investigate after both parties claimed victory in three states – they urged Congress to appoint a commission for an “emergency 10-day audit of election returns in the disputed states”.

“Once completed, individual states would evaluate the commission’s findings and could convene a special legislative session to certify a change in their vote, if needed,” they said.

However, they said their bid was unlikely to succeed. “We are not naïve. We fully expect most, if not all, Democrats, and perhaps more than a few Republicans, to vote otherwise,” they said.

Their move is separate from that of Missouri Senator Josh Hawley, who has also said he will reject the result over concerns about the integrity of the election.

A group of Republicans in the lower chamber of Congress, the House of Representatives, is also planning to contest the election results.

With at least a dozen Republican senators now planning to challenge the election results in Congress, it is clear – if it wasn’t already – that the party’s heart remains with Donald Trump’s efforts to overturn his presidential defeat.

The effort will be futile, given the Democratic majority in the House of Representatives, but the goal for many of these politicians is not to pull off a miraculous reversal of fortune for the president. Instead, it is to curry favour with Trump’s loyal base.

They are wagering that the road to success in the Republican Party will continue to run through Trump and his faithful, whose support could be invaluable to senators with presidential ambitions, like Ted Cruz of Texas or Josh Hawley of Missouri, or ones concerned about future primary opposition from pro-Trump politicians.

This is not the first time members of Congress dismayed by the outcome of a presidential election have objected during the largely ceremonial session. It will, however, be the largest such revolt in nearly a century and a half.

It is a sign that the partisan rancour in the US, exacerbated by Trump’s scorched-earth fight to hold on to the presidency, will not fade away anytime soon.

What will happen on 6 January?

Objections that are endorsed by a member of the House of Representatives and a member of the Senate must be considered by lawmakers in a two-hour debate, followed by a vote.

However, for an objection to be upheld, a majority in both chambers must vote in favour. Republicans hold the majority in the Senate but some of their number have already said they will not contest the results.

Democrats are in the majority in the House.

Top Republicans have said the Senate’s role in certifying the election is largely ceremonial and should not be an opportunity for further lengthy debate about the result.

Senate Majority Leader Mitch McConnell has already recognised Mr Biden’s victory and has asked other Republicans not to object.

Utah Senator Mitt Romney, the only Republican to vote for Mr Trump’s impeachment last year, has also expressed dismay at moves to overturn the election.

“I could never have imagined seeing these things in the greatest democracy in the world. Has ambition so eclipsed principle?” he said in a statement.

The Biden camp has not responded to the latest move to object to the election result. But Biden spokeswoman Jen Psaki has described Mr Hawley’s attempt as “antics”.

“The American people spoke resoundingly in this election and 81 million people have voted for Joe Biden and [Vice-President-elect] Kamala Harris,” she said.

“Congress will certify the results of the election as they do every four years.”

DISCLAIMER: The Views, Comments, Opinions, Contributions and Statements made by Readers and Contributors on this platform do not necessarily represent the views or policy of Multimedia Group Limited.
Tags:
Biden
Mike Pence
US elections 2020