Black Queens bounce back in victory over Cameroon 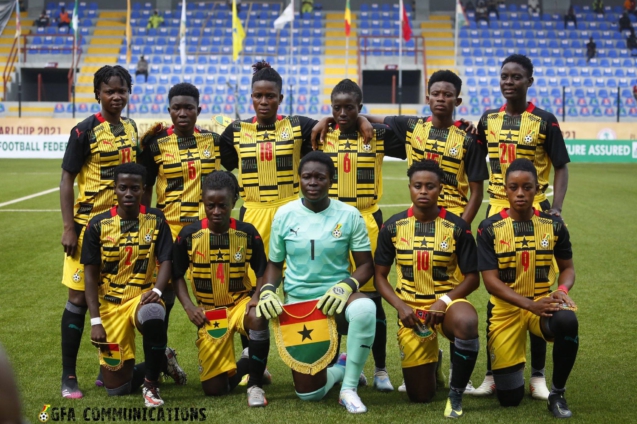 A much better second half performance from the Black Queens in the Aisha Buhari Invitational tournament, saw Mercy Tagoe’s side cruise to a 2-0 win over the Indomitable Lionesses.

The first half of the encounter saw the Black Queens dominate with intricate passing and ball movements, however the lack of cutting edge meant the Queens headed into the half-time break with shoulders half-hanged in disappointment.

The second-half resumed in similar fashion, with Mercy Tagoe’s side as the dominant team. The Queens kept winning all 50-50 and second balls, while maintaining and imposing their possessive style of play on the jaws of the Lionesses.

The first quarter of the 2nd half sent waves of another goalless appearance for the Queens, and a 59th minute 1-on-1 miss from Adubea Priscilla, did little to thwart such fears.

The Queens had a 53rd minute shout swept aside by referee, Amedone Vicentia who paid no-to-little attention to the screams of the Queens’ technical bench and fans alike.

Priscilla proved to be Ghana’s biggest threat throughout the entire game, with her blistering pace and ball skills asking many questions of the Cameroonian defense. Questions they had answers to till the 59th minute, when Priscilla paid atonement for her earlier miss.

It was a mid-air through pass from Ghana’s midfield which split the Cameroonian defence and found an onrushing Priscilla from the wings. The smart first touch of the number 10 took her close to the perimeter of Cameroon’s 6-yard box, and though it being an acute angle, Priscilla displayed wonderful technique, and arrogantly finessed her shot over the keeper.

The Queens’ midfield were absolute metronomes in the game, ‘caressing’ the football along the green grass. Besides their technical ability, they displayed strength and grit, to fight for every ball and close down the opposition.

The Queens’ defence cannot be ignored in the praise, as they showed lots of aggressiveness and pro-activeness in protecting the goal of keeper, Fafali Dumehasi. It seemed they were instructed by their technical team to tightly mark the Cameroonian attackers, as center backs consistently stepped out of their defensive line to engage their opponents.

At the other end of the field, it was Ghana’s forward pair of Adubea and Vivian Konadu who did what their opposite forwards failed to do – successfully battle the defense.

Another pass from midfield, this time by Grace Asantewaa played-in Konadu, who with the goalkeeper inclusive, was found in a 1 v 4 situation. The striker displayed composure and a smart head, skipping past the challenges of a desperate defence and commandingly slotting past goalkeeper, Ange Bawow.

That goal spark jubilation on the Black Queens bench, with Konadu wheeling away and dancing to imaginary music – confident finish, captivating dancing.

That goal coming beyond the 85th minute only meant that, the Queens had to manage the game from that moment and with such a technical yet hard-working midfield, that was not a problem.