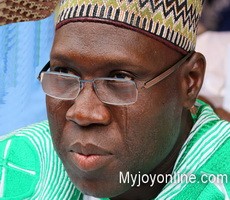 The Energy Minister Inusah Fuseini has accused a former minister of the NPP administration, Prof Mike Ocquaye of terminating the processes leading to the award of the contract to ISOFOTON SA.

According to the Energy Minister, Prof Mike Ocquaye terminated the process on the basis that the Procurement Act had just come into effect.

Inusah Fuseini was speaking at a news conference organized to throw more light on the ensuing judgment debt awarded to the Spanish company, ISOFOTON SA who were contracted by the Ministry of Food and Agriculture and also the Ministry of Energy to supply and install solar powered water pumping irrigation systems and solar electrification project in remote areas of the country, under the second Ghana-Spanish Financial Protocol.

But Inusah Fuseini said the termination of the contract process by the former minister led to the Spanish company seeking redress where the company was awarded an amount of $1.3 million.

Inusah Fuseini stated that it is about time people toook responsibilities for their actions.

The Energy Minister concluded that “it is important for the people of Ghana to hold persons whose acts or omissions have given rise to liabilities imposed on the state, responsible”.