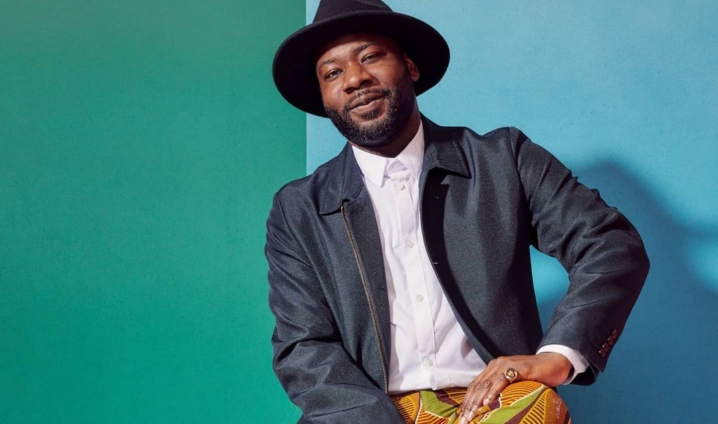 Creator Blitz Bazawule, popularly known as Blitz The Ambassador, is one of the few people pushing boundaries in the world of entertainment.

From successfully producing his critically acclaimed film The Burial of Kojo to receiving a Grammy nomination as a director on Beyonce’s Black is King, his talents know no bounds.

Blitz The Ambassador who wears many hats including author, producer, rapper and director recently spoke to Trevor Noah on ‘The Daily Show’ about his career and new projects he is working on.

He opened up about writing his new book ‘The Scent of Burnt Flowers’ during the height of Covid-19. He explained that the foundation he was exposed to as a kid in Ghana has influenced his work and career.

Blitz The Ambassador also revealed that his debut novel will also be turned into a series.

In a bidding war that included a number of streamers and networks, FX has closed a deal for the development of the six-episode limited series based on The Scent of Burnt Flowers he will write, direct and produce, Bliz The Ambassador said.

He added that Emmy winner Yahya Abdul-Mateen II is expected to play a lead role in the film.

Meanwhile, he is also the director of the 2023 version of the 1985 film ‘The Color Purple’ which starred Whoopi Goldberg, Oprah Winfrey, Lawrence Fishbourne, others and was directed by Steven Spielberg.

He revealed that filming has been wrapped up for the show which now will see stars like Taraji P. Henson, Fantasia, Halle Bailey, John Batiste, H.E.R and others take over the roles from the veterans.

About The Scent of Burnt Flowers

December 26, 1965, Alabama, the fateful night that triggers an avalanche of events that turn newly engaged couple, Melvin and Bernadette, into fugitives.

A pitstop in the wrong part of town ends with blood on their hands, and Melvin decides they must flee the country in order to survive.

Bernadette, who’s hiding a secret from her fiancé, reluctantly agrees. With a persistent F.B.I. agent on their trail, they travel to Ghana to seek the help of Melvin’s old college friend, who happens to be the country’s embattled President, Kwame Nkrumah.

The couple’s chance encounter with Ghana’s most beloved Highlife musician, Kwesi Kwayson, who’s on his way to perform for the President, sparks a journey full of suspense, lust, magic, and danger as Nkrumah’s regime crumbles around them.

What was meant to be a fresh start quickly spirals into chaos. Kwesi and Bernadette’s undeniable attraction and otherwordly bond cascades during their three-day trek, and so does Melvin’s intense jealousy. All three must confront each other and their secrets, setting off a series of cataclysmic events.

Steeped in the history and mythologies of West Africa, at the intersection of the civil rights movement in the United States, The Scent of Burnt Flowers merges political intrigue, magical encounters, and forbidden romance in an epic collision of love, morality, and power.