Boadu Emmanuel: The NABCO crisis and why government must act now - MyJoyOnline.com

Boadu Emmanuel: The NABCO crisis and why government must act now 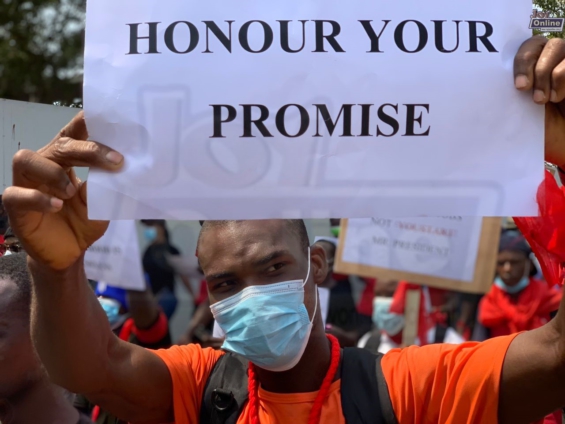 The trainees have asked President Akufo-Addo to honour his promise to make them permanent workers.

As a human rights advocate and a lover of justice, I have has taken a serious view on the growing agitations regarding the failure of government to pay the allowances of beneficiaries of the Nation Builders Corps (NABCO).

I have listened with unbiased attention, the concerns of the affected beneficiaries, together with the response of government and the explanations by party communicators on various media platforms regarding the substantive matter.

After a careful review of all the relevant issues, it is my considered opinion that, in as much as we recognise the current economic challenges in the country, it is disheartening and unfair for the current crop of NABCO beneficiaries to be denied their due, after months of service to the country.

Indeed, it is an act of sheer insensitivity for hard working personnel to be subjected to the kind of disappointment NABCO beneficiaries are going through.

This is totally unacceptable; and as a staunch believer of equal and decent treatment for all, I consider this as a gross violation of the rights of the beneficiaries.

It is however worthy to note that at a time when government keeps lamenting the lack of funds to meet its growing expenditure, President Akufo-Addo has increased his staffers at the Presidency.

A careful examination of the current staff enrollment at the Presidency reveals a duplication of duties and the creation of portfolios, which appear to be a reward system for party loyalists.

In the midst of the scarce resources, we have also observed with disdain, the huge sums of money which have been disbursed for the construction of the National Cathedral.

Apart from the fact that the said amount of GHS25 million has not been approved by Parliament, the idea of a National Cathedral should not even be an item of priority under the current economic circumstances.

Of what use is a supposed national place of worship when citizens have not been paid for the work they have done?

Is it the assumption of the government that God will be happy about an edifice in His name, when His people are starving after toiling and breaking their backs for their country?

In the light of government’s failure to deal decisively with the outstanding arrears owed the NABCO beneficiaries, I want to use this medium to call on President Akufo-Addo and the relevant state agencies to take urgent steps to pay in full, all monies owed the teeming beneficiaries who continue to toil for the country on empty stomachs.

At a time when the threat of terrorism is high in the sub region, it is a lack of discretion and good judgment for government to allow its youthful population to become exposed to the enticements of these terrorist groupings, by refusing to pay them what is due.

I therefore hope that government will consider this and expedite action on clearing the arrears and making life more conducive for the beneficiaries.

A labourer is deserving of his wages without delays and explanations, and therefore I humbly urge government to pay the NABCO beneficiaries now.

The author of this piece is a human rights activist and the leader of Justice for the Vulnerable Organisation (JVO).