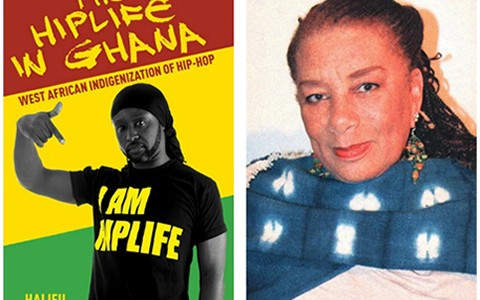 The book which was published by Palgrave Macmillan was released in the USA and Europe on September 18th 2012. The launch was chaired by Professor Daniel Gbedo, a visiting Professor from the University of Ohio, USA. Opening the launch, Prof Gbedo gave a brief presentation of hiphop and its roots to Africa.

During the presentation on the book, Professor Osumare took the audience through the four chapters of the book and her reasons for devoting five years of her academic life into researching on Ghana’s hiplife which is a blend of the highlife of West Africa and hip hop of the USA and pioneered by Reggie Rockstone. She thanked her research assistant, Terry Ofosu and her academic father, Professor Nketiah for giving her all the support.

Professor Nketiah gave a short speech to the audience. He related how language and communication have always been a part of the ways by which people express themselves. He has a whole lot of books to his credit. He read one of the books he authored in his early twenties and got the audience intrigued with the creativity of his dialogue back then and its relevance to today’s world. He mentioned that if hiplife had been around during his youth, he most probably would have been a hiplife artiste and that he is happy his grandson, musician Manifest, who was present at the event is doing so well in the arts.

The President of MUSIGA, Bice Osei Kuffour, who was himself documented in the book, was present at the launch. In his speech, he mentioned his excitement about the book and also spoke about some projects MUSIGA was embarking on, including a research into the contribution of music to the GDP of Ghana, the Ghana Music Week for March 2013 and collaborations with the School of Performing Arts to offer short courses in Arts for practicing musicians. He encouraged all to work towards a peaceful election. Obrafour and Hammer were also present at the book reading.

DJ Black gave a freestyle speech and commended how far hiplife had come. He intimated himself witnessing Reggie rapping in English and switching to Twi, Obrafour performing under a table to him performing in front of a wide audience and Obour maturing to become the MUSIGA President. He took the audience through some samples of hiplife tunes from the 1994 era through to recent times.

The Director of the Institute of African Studies charged MUSIGA to avail their members to interact with their students and to provide answers since they need data for various researches they are conducting with particular relation to the arts.

The book is currently not available on the Ghanaian market because the publishers do not have distributors here. As such, any organization interested in distributing the book can contact the MUSIGA Head Office.