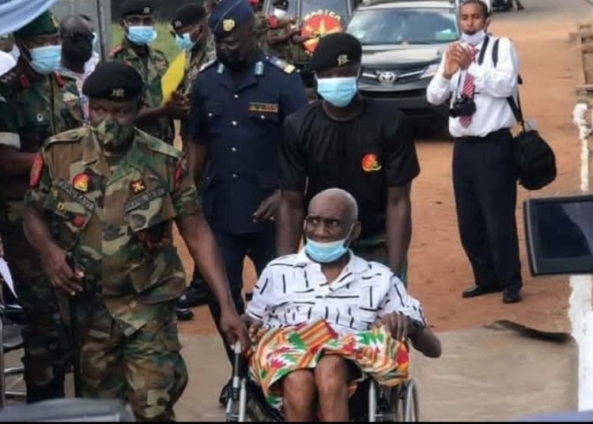 Legendary Olympic medalist, Prince Amartey, who passed on some weeks ago, will be buried in Accra on Friday, October 28, following Thursday’s final rites in the Volta Region.

Amartey, 78, wrote his name in the nation’s history books following his Olympic Bronze medal-winning feat at the Munich Games in Germany in 1972. Prior to this, he had set the tone in the maiden edition of the All Africa Games (later rechristened to the Africa Games) by winning a light middleweight gold medal in the maiden edition in 1965 in Congo-Brazaville. His quality and craftiness were brought to bear once again when he braved through all odds to win bronze at the 1968 edition of the games in Dakar-Senegal.

Major Amarkai Amarteifio Rtd, who managed a team of high-quality boxers in Ghana’s Armed Forces team which included Amartey, describes him as “a crafty boxer whose talent was amazing to watch in the ring. I have seen few like him.”

The build-up to winning the Olympic bronze medal also saw Amartey participate in the 1966 and 1970 Commonwealth games in Kingston-Jamaica and Edinburg-Scotland respectively. While he hardly won any medals at these key events, Amartey’s subsequent achievements proved that the Kingston and Edinburg events were impactful learning curves.

Amartey who was a corporal in Ghana got the opportunity to represent Ghana at the 1971 World Armed Forces Games,1971 in Rotterdam at which time he had moved up to the middleweight division. He exited the army prematurely in the mid-70s.

Prince Amartey belonged to a generation of marquee amateur boxers in Ghana’s national team, the Black Bombers like Clement Ike Quartey-Snr who won silver at the 1960 Rome Olympics, Eddie Blay-Snr who won bronze at the Tokyo ’64 Games, Joe Darkey, Dodoo Wellington, Jojo Myles, Thomas Arimi, Alhaji Alhassan Braimah among others to form a formidable to represent Ghana at major international competitions. Key among these were the Olympics, Africa and Commonwealth.

In the last two decades, the legend has had varied challenges from financial to health. H.E. Major Amarkai Amarterfio (Rtd) upon noticing this, collaborated with the Ghana Armed Forces through its Chief of Defence Staff Vice Admiral Seth Amoama, set up a grocery shop for the legend in Ho last August, to help sustain him financially.

DISCLAIMER: The Views, Comments, Opinions, Contributions and Statements made by Readers and Contributors on this platform do not necessarily represent the views or policy of Multimedia Group Limited.
Tags:
Olympic games
Prince Amartey