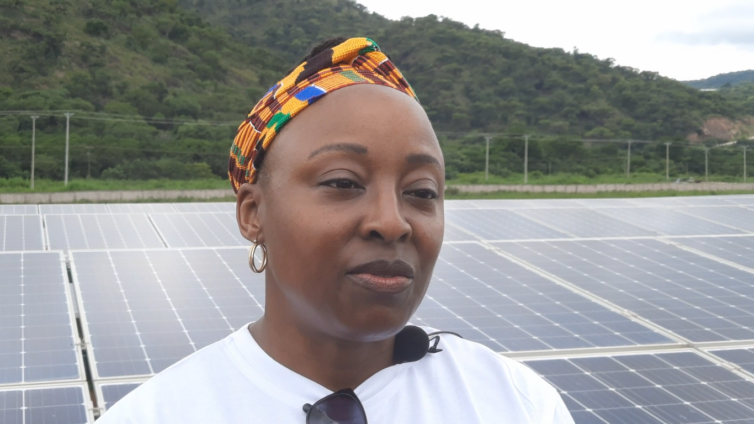 The resident representative for the United Nations Development Program (UNDP) in Ghana, Dr. Angela Lusigi, says Ghana is on the right track to achieving what she described as “an ambitious target” in the renewable energy mix.

Speaking after a tour of the Bui Power Authority’s hydro and solar generation stations, she said though she is impressed, a lot more progress can be achieved with more cooperation.

Dr. Lusigi toured key sections of the generation station and the solar energy farm, including the control rooms and floating solar panels installed on the hydro dam’s reservoir.

The visit was to help ascertain BPA’s work on renewable energy and reforestation in the communities as part of the sustainable development goals on climate change, adaptation, and mitigation and ensure the use of clean energy.

She said there is a diversity of opportunities to grow renewable energy in Ghana per what she has seen on the ground – hydro and solar.

Dr. Lusigi expressed her amazement with the floating solar panels and added that they could be used to ensure energy access for all, and energy transition to ensure more renewables in the energy mix.

“Ghana has an ambitious target, and I believe this is definitely on the pathway of achieving it.”

She commended the Authority for the work on reforestation and said, “Not only are we looking at energy generation but also helping the communities maintain the resources that are necessary to continue enjoying some of these benefits”.

“There is a lot of progress that has been made, and with more partnership, we can see, hopefully, a lot more progress”, she said.

Dr. George Ortsin, who is with the UNDP Global Environment Facility Small Grants Program, said they are already assisting some communities in the management of their natural resources.

He, however, said they are exploring the possibility of stepping it up with a “Green Climate Fund” to support some of the interventions, and they hope to work it out with BPA.

BPA is operating a 400mw hydro dam and a 50mw solar plant. An additional 150mw solar plant is under construction at the Bui enclave, with plans to complete by June 2023.

The Authority is also undertaking a solar project at Yendi in the Northern Region with plans to start another in Buipe in the Savannah Region.

A Director in charge of renewables at BPA, Wisdom Ahiataku-Togobo, explained that as the largest solar plant operators, they look forward to a partnership with UNDP for the achievement of Ghana’s climate goal target after their assistance in building the first-ever Tsatsadu micro hydropower plant.

He said “the Authority is committed to a net zero energy transition as well as the Paris agreement and the United Nations sustainable development goals”, hence the need to collaborate with UNDP to achieve their target.

She was briefed by BPA’s deputy director of occupation, health, safety, and environment, Chrisantus Bangkewa Kuunifaa, on how the needed financial support could expand the tree plantation to over 5,000 trees per year.

He explained that their resolve to plant more trees is to ensure the continuous protection of the dam against siltation, sedimentation, and soil erosion, and also improve the hydrological cycle and microclimate in the enclave.

Mr. Kuunifaa further said there are a lot of economic benefits for the local communities as some of the grown trees would serve as food, poles, and timber.