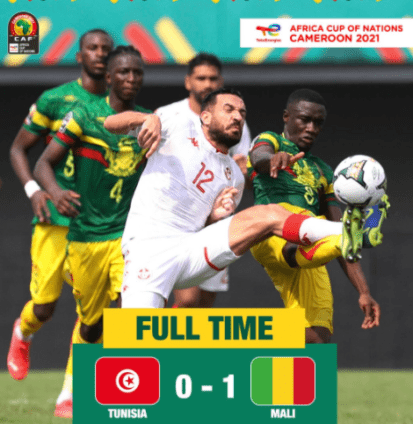 The Confederation of African Football (CAF) Organising Committee for the 2021 Africa Cup of Nations has dismissed a protest lodged by Tunisia over the early closure of its game against Mali.

In a press statement signed by Director of Competitions, Samson Adamu, CAF noted that the decision was taken after a meeting held on January 13, to examine the case of the Group F opening game between Tunisia vs Mali.

Aside from dismissing the protest, the Committee, after examining all the match officials report, decided to “homologate the match results as 1:0 in favour of Mali.”

On Tuesday, January 12, day 4 of the Total Energies AFCON, being hosted by Cameroon, saw Tunisia and Mali come face to face in Group F’s opener.

The game did not run smoothly as expected as Zambian referee Janny Sikazwe twice called for the closure of the match before it was officially ended and awarded a controversial red card to Mali’s El Bilal Toure.

In the 85th minute, he blew the whistle to end the game. He later rescinded the decision, and the game continued. Then, some few seconds to 90 minutes, he whistled for full-time.

Sikazwe’s decision to end the game before the 90th minute caused a stir as the officials of the Tunisian team approached the referee for some clarification. The team, according to reports, boycotted an opportunity to end the game at the official time though their head coach said otherwise.

The game ended with the scoreline at 1:0 in favour of Mali.

DISCLAIMER: The Views, Comments, Opinions, Contributions and Statements made by Readers and Contributors on this platform do not necessarily represent the views or policy of Multimedia Group Limited.
Tags:
AFCON 2021
CAF
Tunisia