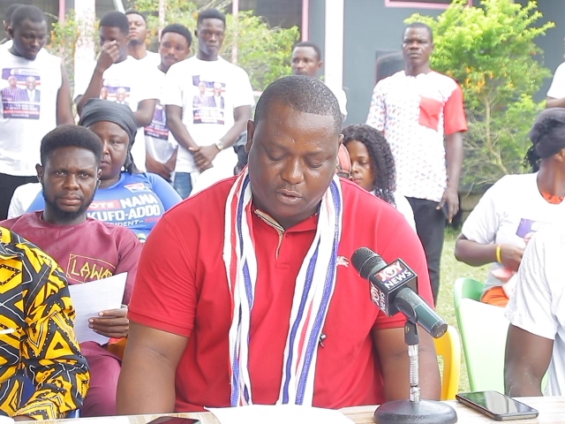 The NPP youth in the Hemang Lower Denkyira Constituency of the Central Region are appealing to the President and the NPP National Executive to call the CEO of Exim Bank, Lawrence Agyensam, to order.

According to the youth, the Exim Bank CEO, is undermining the work of the MP, Bright Wereko Brobbey.

The youth believe, the events of the polling station elections and the chaos that has erupted in the Constituency, could cost the party the seat in 2024.

Speaking at a press conference at Twifo Hemang, Youth organizer of the party, Aliu Sumaila stated, Mr. Agyensam has been inciting the youth using money to distract the MP who is also a Deputy Minister of Employment and Labour Relations.

The NPP in the Hemang Lower Denkyira Constituency has been in a state of confusion lately following the polling station elections that took place there.

Two factions have emerged. While one says the elections were duly conducted, the other faction holds the view that no polling station elections has taken place and that there were acclamations done at their blind side.

Some supporters and polling station aspirants of the NPP in the Constituency petitioned a circuit court in Cape Coast to injunct 8 election committee members of the party, who they believe carried out some injustices as far as the organization of the polling station elections were concerned. The court granted their wishes and injuncted the said persons.

The supporters and aspirants after the court ruling, besieged the party’s regional office calling on the party to intervene in an election that they had described as fraudulent.

But at a news conference at Twifo Hemang, Constituency Youth organizer, Aliu Sumaila called on the NPP leadership and the President to call the Exim Bank CEO to order. The youth believe the CEO is undermining the MP for the area and the earlier he was called to order, the better it would be.

“Twifo Hemang Lower Denkyira has witnessed some individuals insulting and attacking the MP on social and traditional media as well as Inciting people to boycott the activities and programmes organized by the MP and the Constituency leadership,” he stated.

Mr. Aliu Sumaila added that several attempts by the powers that be to bring them on board has failed. This approach follows attempts by the CEO of the Exim Bank and his cohort in a failed skirt and blouse move, to cause the then Parliamentary candidate of the area, Bright Wereko Brobby to lose the 2020 Parliamentary elections.

“We are respectfully calling on the President of the Republic, the Vice President and the entire leadership of the NPP to call Mr. Lawrence Agyensam, the CEO of Exim Bank to order because he is the paramount beneficiary of the power we have now.”

He ended, “Mr. Agyensam has not been an MP before, but he’s been a parliamentary candidate before and we all saw what happened.”

The fears of the NPP supporters in the Constituency are that, should the chaos and the disorder continue, the party may lose the seat to the National Democratic Congress, thereby having a consequence on the fortunes of the party in the 2024 elections.

DISCLAIMER: The Views, Comments, Opinions, Contributions and Statements made by Readers and Contributors on this platform do not necessarily represent the views or policy of Multimedia Group Limited.
Tags:
Bright Wereko Brobbey
Exim Bank
Hemang Lower Denkyira
Lawrence Agyensam