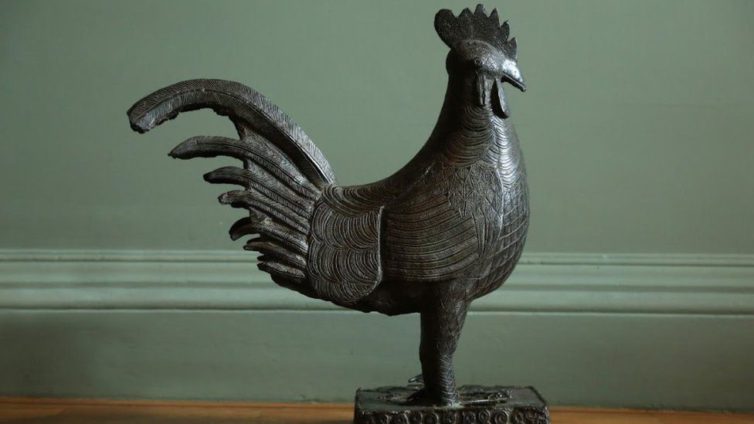 Cambridge University is due to return a Nigerian artifact looted during a British raid to its country of origin, in a historic first.

Nigeria’s National Commission for Museums and Monuments will receive a Benin bronze cockerel from Cambridge’s Jesus College later this month — in a move the university called the “first institutional return of its kind.”

The Benin bronze was given to Jesus College by a father of a student in 1905, after it was first acquired in a 1897 expedition by British forces into the historic kingdom of Benin — now part of modern-day Nigeria — which resulted in the looting of thousands of bronzes from the region.

Following calls from the student body, the Benin bronze was removed from public display in 2016. Jesus College later established the Legacy of Slavery Working Party [LWSP] — comprised of students and academics — to further explore the history of the bronze, its links to the slave trade, and the morality of owning it.

In November 2019, the college announced it would be returning the bronze to Nigeria after calling it a “royal ancestral heirloom” and stating that it “belongs with the current Oba at the Court of Benin.”

Cambridge University said in a statement that delegates from Nigeria’s National Commission for Museums and Monuments and Benin would visit Jesus College on October 27 for a “ceremony to complete the handover process and celebrate the rightful return of the Bronze.”

In a statement to CNN, Nigeria’s Minister of Information and Culture — Alhaji Lai Mohammed — said of the return:”This gesture by Jesus College is a big step on the path of restitution for the hundreds of priceless and timeless artifacts that were looted from Benin City in 1897.”

“I hope this commendable action by Jesus College will spur other institutions as well as individuals in possession of Nigerian artifacts to return them voluntarily,” the Minister said. “We will not rest until all our artifacts that have been illegally taken away are returned to their homeland.”

The grim truth behind Britain’s stately homesThe Oba of Benin, Omo N’Oba N’Edo Uku Akpolokpolo, Ewuare II said of the bronze’s return: “We are indeed very pleased and commend Jesus College for taking this lead in making restitution for the plunder that occurred in Benin in 1897.”

We truly hope that others will expedite the return of our artworks which in many cases are of religious importance to us.”Sonita Alleyne, the Master of Jesus College, called the decision a “historic moment” and said it was the “right thing to do out of respect for the unique heritage and history of this artifact.”

Alleyne gave thanks to the LWSP “for its diligent and careful investigation into the provenance of the Bronze” and to the “students who pioneered calls for this.”

The return of the Benin bronze to Nigeria comes as momentum continues to gather for campaigns for museums, galleries and other institutions across the UK to return artifacts looted during Britain’s colonial era to their nation of origin.

Britain’s imperialist monuments and looted artifacts have been facing a reckoning over the past year — after calls to bring down statues to colonizers and to repatriate historical objects to their original homes reached a peak during the Black Lives Matter protests of 2020.