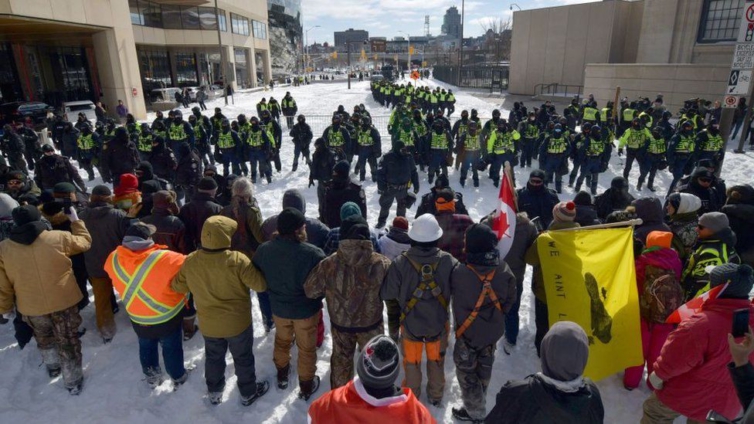 Police have clashed with demonstrators in Canada’s capital, Ottawa, as they move to end a three-week anti-vaccine mandate protest, with 100 arrests made.

The operation started early on Friday, with some officers on horseback, after the government invoked the Emergencies Act to crack down on the protest.

Some protesters who resisted were thrown to the ground and had their hands zip-tied behind their backs.

Police have also accused protesters of using children as a shield.

A group of protesters have remained in the city in defiance of orders to leave. Footage from the scene showed hundreds of police officers advancing into the heart of the protest zone, next to Parliament Hill.

Some of the remaining protesters formed a line in front of approaching officers, linking arms and singing O Canada – the national anthem.

“Freedom was never free,” protester Kevin Homaund told the Associated Press. “So what if they put the handcuffs on us and they put us in jail?”

Ottawa police have set up almost 100 police check-points around the main protest site as well as a large business and residential district in the city centre to prevent more protesters from entering the area.

“DEMONSTRATORS: You must leave,” Ottawa police wrote on Twitter. “Anyone within the unlawful protest site may be arrested.”

Police have also towed 21 vehicles as part of the operation. No protesters were injured during the operation and those arrested face various charges including mischief, Ottawa’s interim police chief Steve Bell said.

He would not say how many protesters remain at the site of the demonstration or how long the police operation is expected to take.

“We will work day and night until this is completed,” he said.

Two leaders of the trucker convoy were scheduled to appear in court on Friday. Tamara Lich and Chris Barber were both charged with mischief. Mr Barber also faces an obstruction charge.

What began in late January as a truck convoy headed to Ottawa to oppose a vaccine mandate for truckers crossing the US-Canada border grew into a broader opposition to pandemic restrictions and Mr Trudeau’s government, with supporting protests across the country.

Parliamentarians were scheduled to debate the decision by Prime Minister Justin Trudeau to invoke the never-before-used emergencies law.

The law grants government added powers in times of crisis and has been used to impose bans on public assembly in some areas of Ottawa and has prohibited travel to the protest zone, and bringing children to the area among other measures.

Conservative interim leader Candice Bergen called on Twitter for MPs to return to Parliament on Saturday to stop the “overreach” – referring to Mr Trudeau’s order.

Authorities last weekend cleared the most economically damaging blockade – a bridge linking Windsor, Ontario, with the US state of Michigan. Trucker protests at other border crossings in Coutts, Alberta, and Emerson, Manitoba, ended this week.

Many Ottawa residents have expressed frustration at local police, saying not enough was done to clear the protest, which has paralysed parts of the city around parliament and affected local businesses. The police chief resigned earlier this week over his handling of the demonstration.

On Thursday, an Ontario Superior Court Judge approved a court order freezing millions of dollars – including some held in crypto-currency – raised from around the world to support the protests.

The freeze is part of a class-action lawsuit filed by residents and business owners in Ottawa against protest organisers and participants, as well as against all those who donated funds after 4 February.

Paul Champ, the lawyer for the plaintiffs told the BBC that this order was the “first of its kind” in Canada. The BBC has reached out to a lawyer representing the protesters for comment.

The government has also begun freezing bank accounts linked to the protests under the temporary emergency measures.