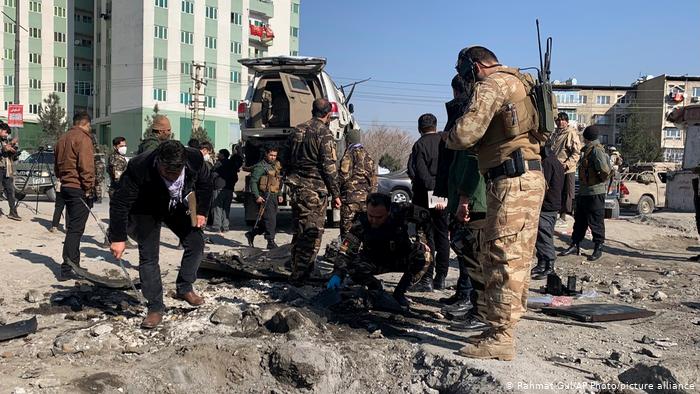 The Deputy Governor of Kabul has been killed by a car bomb, seemingly with his vehicle specifically targeted. The war-torn country remains restless as peace talks with the Taliban drag on and IS tries to gain ground.

The Deputy Governor of Kabul Mahbobullah Mohibi was killed on Tuesday in what the Ministry of Interior Affairs called an apparent targeted bombing.

Unknown assailants attached a magnetic bomb to the official’s vehicle in the 9th police district in the Afghan capital, killing the official and his secretary as well as wounding two of his bodyguards.

In another part of the city, an unknown assailant shot and killed one police officer, wounding another, the spokesman for Kabul’s chief police, Ferdaws Faramarz, said.

Authorities have launched an investigation into the shooting.

Deadly attack is a ‘war crime’

Ministry spokesman Tariq Arian announced the news on Twitter, saying: “Around 9:40 this morning the Land Cruiser belonging to Kabul’s deputy governor, [Mahbobullah Mohebi], was targeted with a magnetic mine in the Macroryan 4 neighborhood.”

“Unfortunately, the deputy governor of Kabul and his secretary were killed and two of his bodyguards were injured. This terrorist act is a war crime and a crime against humanity.”

Arian went on to say that security forces had been cracking down on terrorist cells in the country in recent weeks. No group has yet claimed responsibility for either of Tuesday’s attacks.

The Islamic State group which is active in Afghanistan has carried out a spate of deadly attacks in the capital in recent months, killing as many as 50 people.

At the same time, peace talks between the Afghan government and Taliban militants are ongoing amid continued violence.

The Taliban has also been caught up in fighting its Islamist rival Islamic State, especially in the newer group’s strongholds in the east of the country.

Government and Taliban leaders are set to meet again in on January 5 to start discussing the agenda for a peace negotiation after a three-week pause.

DISCLAIMER: The Views, Comments, Opinions, Contributions and Statements made by Readers and Contributors on this platform do not necessarily represent the views or policy of Multimedia Group Limited.
Tags:
Car Bomb
Deputy Governor Mahbobullah Mohibi
Kabul