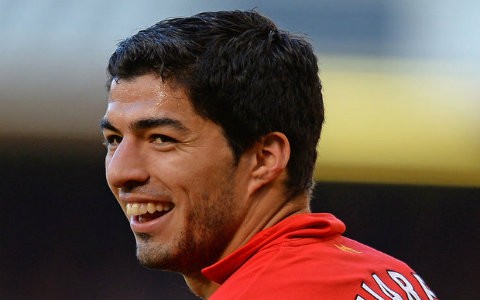 Having taken apart Manchester United last weekend, Brendan Rodgers' side were required to show a different side to their game on Saturday as they found themselves behind twice in south Wales.

With Chelsea hammering Arsenal 6-0 in the day's early game, Liverpool fought back to keep in touch with the leaders at the top and in the process set a new club record for goals in a Premier League season.

Eager to build on the momentum of their victory at Old Trafford, Rodgers' side made a far from ideal start – going a goal down after nine minutes.

Jordon Mutch was the man on target, registering his fifth Premier League goal of the season, before Suarez hauled Liverpool level soon afterwards, applying a calm finish to a slick team move.

Liverpool's frustrations continued though, and 25 minutes in Fraizer Campbell profited from some questionable defending from the visitors to restore Cardiff’s lead.

However, Martin Skrtel ensured that the sides went in level at the break when he got a toe on the end of Philippe Coutinho's whipped delivery to score Liverpool's 78th league goal of the campaign before adding his second after the interval.

Suarez then scored twice either side of Daniel Sturridge's strike to take the game away from Cardiff, with the only glimmer of positivity for Ole Gunnar Solskjaer being the performance of Much – who completed his brace late on – and the defeats suffered by relegation rivals Sunderland, Fulham, West Brom and Crystal Palace.

Cardiff began the game on the front foot and were rewarded when Mutch fired home the opener.

After Campbell's neat lay-off, the midfielder drove at goal and finished past Simon Mignolet with his left foot – although the lead lasted just seven minutes as Suarez restored parity following a well-worked move.

Jordan Henderson played Glen Johnson in behind the hosts' defence, with the full-back crossing for Suarez to find the net for a third Liverpool game running.

The Uruguayan, who scored twice against Cardiff in this season's reverse fixture back in December, went close to scoring a second shortly afterwards – almost getting on the end of Sturridge's cross – but it was former Manchester United man Campbell who was next on the scoresheet after 25 minutes.

Having got on the end of a lofted ball forward, Campbell cut inside Daniel Agger and placed an effort into Mignolet's far corner.

Liverpool showed glimpses of their attacking qualities but for long spells they lacked the cutting edge on show in recent months.

But that all changed towards the break, and it was defender Skrtel who proved to be their unlikely hero.

He drew Liverpool level for a second time with a prodded finish from close range five minutes before the interval and after the break, Skrtel and Coutinho combined again, with the defender directing a header into the far corner of David Marshall's net.

Liverpool were finally in the ascendancy, and after Suarez had added his second with a clever finish from Sturridge's backheeled assist there was no way back for the hosts.

Sturridge himself added the fifth, before Mutch became the third player of the match to score a double when he headed home Kenwyne Jones' knock-down.

Suarez completed the scoring and his hat-trick late on – keeping his composure when through on goal to calmly slot past Marshall as Rodgers' men made it six league wins in a row.