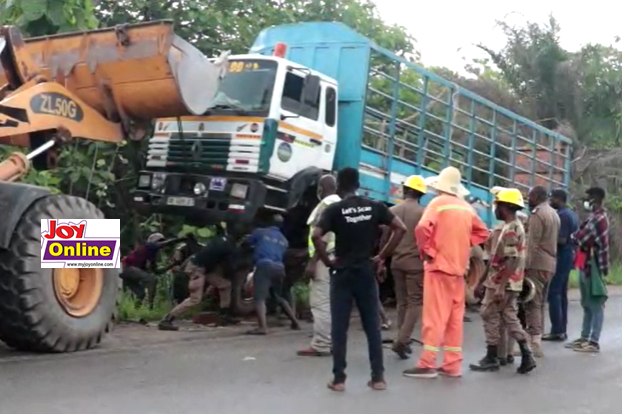 A cargo truck loaded with food items travelling from Bimbila to Accra was involved in an accident between Dodo-Pepesu and Dapaa junction in the Kadjebi District in the Oti Region.

The accident, which is said to have occurred at about 10 am, blocked traffic for over four hours.

It took the intervention of the police service, the fire and rescue services and the Sinohydro contractors to clear the road to traffic after 4 pm.

According to the driver, Musa Sulemana he was avoiding a pothole in the middle of the road but run into another breaking one of its front shafts forcing the fully loaded truck to fall on it its sides.

Musa said he was carrying goods worth ¢13,000 in the vehicle with registration number GR-6255-D.

“I was going to dodge a pothole when one of the front shafts got broken and the car tipped over. We were moving from Bimbila to Accra.”

Musah is calling on the contractor to fix the pothole while the main construction works continue. He claims to have lost two of brothers on the same spot last year.

He said he was lucky to have survived this accident. The truck had its content scattered on the road with groundnuts and beans in sacks spilling over the road some into the bush.

It took the intervention of some residents from Dodo-Pepesu to help clear the goods on the road in order to make way for free flow of traffic.

Meanwhile, the police is asking drivers to exercise patience on the road in order to notice the potholes and other obstacles while the road is currently under construction.

Police officer in charge of the jurisdiction the accident occurred, Chief Inspector Samuel called on drivers to be cautious as they go about their businesses.

“The only advice I have for them is they should always take time because you cannot tell where the pothole is. You cannot say that the road is smooth so you want to speed, but all the time drive peacefully and go wherever you are going,” he explained.

The resident engineer for the Ghana Highway Authority, Emmanuel Klu blamed the accident on reckless speeding by some drivers who plight the road.

He, however, called for calm as the contractor works to put the road in order.